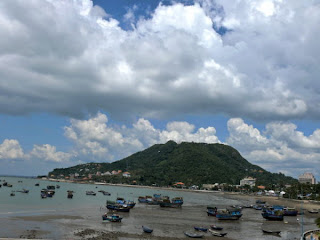 (Vung Tau lies on the coast of the South China Sea. Photo from German club website.)

The World Youth Chess Festival in Vung Tau, Vietnam invites only the best of the best from around the world. Anyone who holds their head high among this competition is a champion, even if they don't finish in the top three.

Northern California's three champions have not had it easy so far. FM Sam Shankland drew with a Grandmaster yesterday in U18, but lost to an equally strong International Master today. Still, his overall performance rating remains above the IM norm threshold. Proving that lightning doesn't strike twice, FM Danya Naroditsky has uncharacteristically struggled in U14 with two draws and a loss. Last but not least, Alisha Chawla plays the hardest event of her young life in Girls U8, but she is on the scoreboard with a win.

Results updated for round 6 on Friday morning. Danya is back on track after a rough start. Alisha won her second game. The next round is on Sunday.

I update the daily results below. Check out the games from rounds 1-5 at ChessAsia.net.

Round 5:
Round 6:
Standings after round 6:Unfortunately, the playing conditions remain poor due to the tropical heat without fans, air conditioning or other means of ventilation. Danya's father, Dr. Vladimir Naroditsky collected testimonials from parents over the past two days for this summary:
Hopefully enough coaches and parents from different countries complain so that the organizers will address this problem, either by fixing the A/C or at least installing an army of fans. If the parents suffer while just sitting and waiting, then I worry about the young chess players who try their best for 4+ hour long games in this heat.
Posted by Michael Aigner at 7:39 AM