Vote on Sunday for Earth vs Space 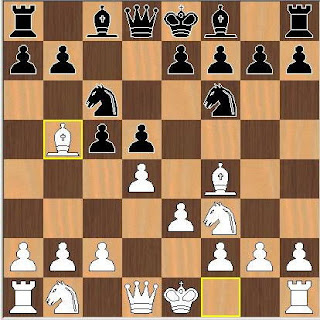 The Earth vs Space match is proceeding slowly but steadily on the USCF website. In a unique outreach from a high

orbit on the International Space Station (see photo at right), astronaut Greg Chamitoff is playing a chess game against all of us Earthlings. The opening is a London system featuring 3.Bf4 instead of the far more popular (among masters) move 3.Bg5.

On Saturday afternoon, the astronaut played the natural but novel response 5.Bb5 (c3 or Be2 are common). Actually, it isn't entirely a novelty, as my database turns up a game between two Cuban Grandmasters (Nogueiras vs Bruzon 2005) which continued with 5... Bg4 6.Nbd2 cxd4 7.exd4 Qb6. The good news for us Earthlings is that black won.

What four moves will the national champions from Stevenson Elementary School in Bellevue, Washington recommend to us? And more importantly, what will humanity decide to play? Here's your chance, yes YOU, to vote! The match director emailed me that the polls will be for much of the day on Sunday, beginning in the early afternoon. Let's rock the vote! (You do not have to register at the USCF website to vote. This event is open to ALL chess players, including non-USCF members.)
Update on Sunday afternoon: Our choices are Qb6, Qa5+, e6 and Bd7. The move Bg4 played by GM Bruzon was not seriously considered by the kids from Washington.
Posted by Michael Aigner at 12:30 AM