Results at Online Cup for Disabilities


The 1st FIDE Online Cup for Players with Disabilities on May 21st saw 36 competitors representing 27 countries on five continents battle for five intense rounds of rapid chess at the PlayChess.com platform. The diverse field included amateurs and professionals, ranging from one Grandmaster and six International Masters to a handful of unrateds. A quarter of the participants were women. Click for an article at the ChessBase website.

The World Chess Federation (FIDE) organized the tournament as part of a global effort to promote chess and Checkmate Coronavirus. During the brief opening ceremony on Zoom, FIDE President Arkady Dvorkovich of Russia welcomed the players and encouraged everyone to "stay safe and play chess." International Arbiter Marco Biagioli of Italy directed a smooth event.

When the bits finally settled, GM Marcin Tazbir of Poland took first place on tiebreaks over FM Sander Severino of the Philippines. Tazbir currently ranks as the strongest blind chess player in the world while Severino suffers from ALS (Lou Gehrig's disease) and is confined to a wheelchair. Two Russians shared third place with the Hungarian representative.


Competing in my maiden international invitational as the lone American, I aspired to perform sufficiently well to earn a signature win. The results were mixed. My score of 2.0 out of 5 seemed respectable considering the challenging pairings - two IMs and two FMs. Unfortunately, detailed analysis of the games showed that I missed too many tactical combinations, even considering the time control of G/10 + inc/5. In the first round, I achieved a dominant position within a dozen moves as black against an Israeli IM, yet inexplicably left my rook en prise on move 19. At least I could blame the 6:00 AM start time for that blunder. Three rounds later, I gleefully forced a draw by repetition after an inferior opening, but failed to even consider a crushing zwischenzug.

While I did defeat an underrated young man from Uganda, my signature result was a draw versus Russian IM Andrei Obodchuk, the 8-time (former) world champion of the Physically Disabled Chess Association (IPCA). Nobody would confuse this game with a brilliancy, but my students know how much I cherish saving difficult endgames.


In the final round, I faced FM Ilia Lipilin from Russia, the 2-time defending World Junior Champion for Players with Disabilities. The opening went well, but my opponent turned the tables after a missed opportunity on move 27. Well played young master!


Regardless of my personal result, the Online Cup for Players with Disabilities was well organized and a truly enjoyable opportunity for the players. I deeply appreciated the invitation from FIDE and US Chess to participate.

How well do you really know fpawn? Chess blogger and longtime mentee NM Kirk Ghazarian was determined to find out. Kirk asked the right questions and I gave him my honest replies. Check out the following sample of the topics:

Kirk included several photos and three games to illustrate the power of the King's Bishop Pawn - a trio of Black wins in my favorite Dutch Defense opening.

Thank you Kirk for inviting me for this interesting interview. Keep up your good work!
Posted by Michael Aigner at 2:32 PM No comments:


The cancellation of chess tournaments around the globe due to COVID-19 also forced the postponement of the first Chess Paralympiad scheduled for late July in Khanty-Mansiysk, Russia. In its place, the World Chess Federation (FIDE) introduced a new Online Cup for Players with Disabilities.

Unfortunately, a small Online Cup can in no way replace the larger Paralympiad. Instead of teams of four players plus an alternate from each invited nation, only 38 individuals will battle for five rounds of rapid chess at PlayChess.com on Thursday morning, May 21st. The first round begins at 6:00 AM Pacific time.

I felt honored to be able to accept the invitation to represent the United States!

The registration list shows that I start near the middle of the pack. The field of 38 includes one GM, six IMs and a total of twelve players rated above 2200 FIDE. Nine women were invited. Most participants hail from Europe or Asia, with just three from Africa and four from the Americas.

Wish me luck, as I will certainly need it against this competitive field. Since there are only five rounds, even the pairings may boil down to luck.
Posted by Michael Aigner at 11:11 PM No comments:


Posted by Michael Aigner at 3:24 PM No comments: 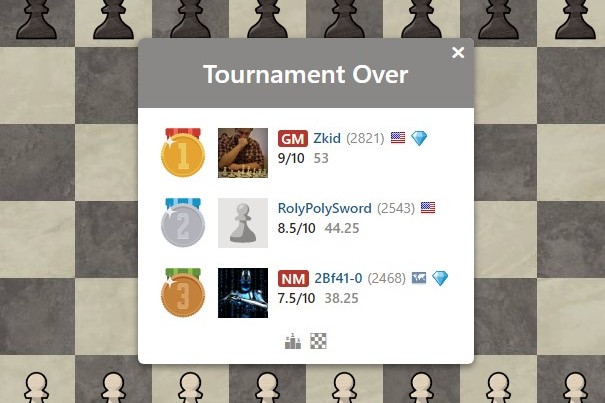 Thanks to everyone who joined! It felt great watching some of you push pawns after so many years. Also thanks to Judit Sztaray of the Mechanics' Institute Chess Club for promoting the evening and hosting the virtual Meet & Greet on Zoom before the first round.
Posted by Michael Aigner at 1:30 PM No comments:

Due to the COVID pandemic, the Mechanics' Institute organized its annual Memorial Blitz online at Chess.com. This special event honors the memory of three masters who have departed after leaving their mark on the Bay Area chess community: NM Ray Schutt, SM Steve Brandwein and IM Jay Whitehead. In previous years, the large crowd of participants would socialize and munch on snacks between rounds of serious chess.

Fortunately, the mandatory move online did little to dampen attendance - 104 players joined, including two Grandmsters, two International Masters, three FIDE Masters and at least seven National Masters. The competition was fierce starting in the first round, when three titled players lost or drew and a fourth overslept. No doubt, Ray, Steve and Jay would have enjoyed watching all of the fighting chess, even while socially distanced.

Veteran IM Elliott Winslow stormed out of the gate for the early lead, winning six straight games. The top seed, super-GM Rauf Mamedov of Azerbaijan, finally reeled him in. After round 7, four players shared the lead with 6-1: GM Mamedov and IM Winslow were joined by GM Steven Zierk and talented 13-year old IM Christopher Yoo.

The two Grandmasters clashed in round 9. Zierk, playing the black pieces, emerged victorious in a theoretical line of the Tarrasch variation of the French, gaining the advantage of two minor pieces against a rook and extra pawn.

Both Zierk and Mamedov held serve in rounds 10 and 11, allowing the local GM to clinch the tournament despite blundering into last round draw by repetition against this reporter. Congratulations Steven!

The blitz tournament was broadcast on Twitch with live commentary from the multi-talented Mechanics' Institute staff, including GM Nick de Firmian and FM Paul Whitehead. Replay the entire show at your leisure on YouTube! The game Mamedov vs Winslow begins at 1:25:00 while Mamedov vs Zierk starts at 1:48:40. Readers of this blog might enjoy the tense final round match between Zierk and Aigner at 2:20:25.
Posted by Michael Aigner at 11:17 PM 1 comment: