Over almost a decade, the Ray Schutt Memorial has become one of the strongest and most popular blitz tournaments in the Bay Area.  The last three years saw an average of 50 players, including many masters with several Grandmasters and International Masters.  GM Daniel Naroditsky won a year ago with a perfect 10-0 score.  Earlier this year, the Brandwein blitz attracted 6 GMs plus 6 IMs.

Due to a direct conflict with the CalChess Super States, the Schutt blitz will mostly be an adult-only event this year. Come down for a fun afternoon of chess in the City!

ENTRY FEE: $10 (free for GM / IM / WGM / WIM)
This tournament is UNRATED. Membership in USCF is not required. 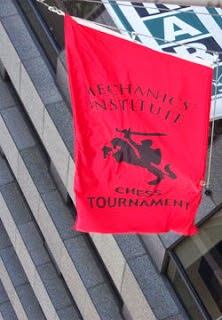 These prizes are guaranteed due to the generosity of the Schutt family.  Every player takes home a book prize!


There will be no registration in advance.  The tournament will be held between roughly 1 and 5 PM.  Light refreshments courtesy of the Schutt family. Even if you don't play, please come and enjoy the atmosphere as we pay respect to the popular 2300 rated master.

I regret never knowing Ray. However, we did play one tournament together, and apparently sat next to each other in the first round. It was the 1998 CalChess Labor Day held in Union City.  I was rated 2124 back then and played up in Master section. Ray finished with 3.5 while I scored 2.5.
Posted by Michael Aigner at 12:00 AM No comments:

2015 US Champs: Nakamura and Krush


Grandmasters Hikatu Nakamura and Irina Krush, both top rated in the country, finished first at the 2015 US Championships in Saint Louis.  For Nakamura, it was his fourth title and the solid result left him at 2799, number 3 in the world rankings.  Undefeated and among the leaders throughout, the favorite found himself unable to separate from the competition, specifically GM Ray Robson, who took second place.  Krush captured her seventh Women's crown, tying a record dating back to the 1970s.  Her path to victory was more adventuresome and included an early defeat at the hands of second place finisher IM Nazi Paikidze.

The tournament did not go well for the Bay Area participants.  GM Sam Shankland ended up in eighth place, although his lone victoryn versus GM Timur Gareev earned the Best Game prize.  Unfortunately, GM Daniel Naroditsky began with a pair of losses and never recovered.

Play through the games here.  Thanks to sponsor Rex Sinquefield and the Chess Club and Scholastic Center of Saint Louis for hosting the spectacular multimedia show.

Next up in Saint Louis: a thrilling rapid and blitz exhibition between chess legends Garry Kasparov and Nigel Short on April 25-26!
Posted by Michael Aigner at 9:40 PM No comments:

Meet the Players at US Championship

The 2015 US Championship kicked off this afternoon at the posh Saint Louis chess club.  Over the next fortnight, twelve Grandmasters will compete for the national title, playing each competitor once.  Rounds begin daily at 11AM Pacific time and take about 4 to 5 hours (rest day on April 6).  The winner pockets $45,000 out of the $175,000 prize fund.  Even last place nets $4,000.  The superb playing conditions and generous prizes are possible through the continued sponsorship of club founders Rex and Jeanne Sinquefield.

The playing field includes the top eight Americans on the current FIDE rating list, including two of the world Top 10 and six of the Top 100.  The showdowns between favorites, contenders and dark horses mark an exciting time for US chess.  I have broken down the field below, including short remarks about each of the invitees.  All ratings and rankings are FIDE.

Click for live coverage with video commentary by Grandmasters Seirawan and Ashley.


Dark Horses -- Grown up Young Stars ready to fight
Wily Veterans -- When Experience matters, they're the best
Young Stars -- Not yet Contenders, but can beat anyone
Pretenders -- Only need a kick in the rear and a little Luck

The concurrent 2015 US Women's Championship features a defending champion aiming to win her fourth straight crown against a 12-player field that welcomes five newcomers.  Top rated GM Irina Krush (2477 FIDE) is the overwhelming favorite as she pursues her sixth national title.  In the absence of chief rival IM Anna Zatonskih, the next highest rating belongs to IM Nazi Paikidze (2333), a recent immigrant from the country of Georgia.  Other challengers include two experienced competitors: IM Rusudan Goletiani (2311) and WGM Tatev Abrahamyan (2301).  The youngest invitees are 13-year old  WFM Jennifer Yu and 12 year old WIM Annie Wang, a pair of gold medalists at international youth championships last year.  A first place award of $20,000 highlights the record $75,000 ladies prize fund.
Posted by Michael Aigner at 10:27 PM No comments: