Shankland Stuns Onischuk to Reach Semis of US Championship 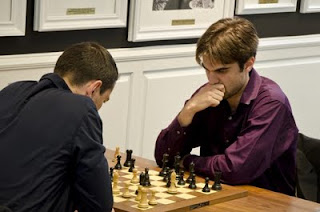 (Shankland at right contemplates his position against Onischuk. To view more photos, click on cover images for each round at St. Louis chess club website.)

Last year's US Junior champion and one of the Bay Area's most talented juniors ever, Sam Shankland did the unthinkable as one of the lowest rated players at the 2011 US Championship in St. Louis. Waiting for FIDE to approve his Grandmaster title, "Shanky" earned a spot in the national semifinals by eliminating the country's #3 player. His reward for dominating GM Alex Onischuk is a mini match against defending US Champion and former World Championship candidate GM Gata Kamsky.

The other semifinal pits 2008 US Champion GM Yury Shulman against GM Robert Hess, the nation's top rated teen. It will be very interesting to watch the nation's top two juniors play against their more experienced opponents. Anything is possible--even a final between Shankland and Hess! 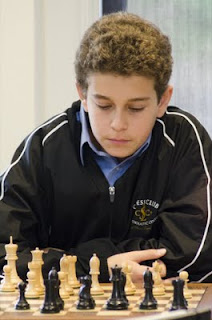 Semis are scheduled for Saturday and Sunday, with any necessary tiebreaks on Monday. Games begin daily at noon Pacific and will be broadcast live at ICC and on the Saint Louis club website. The final takes place on Tuesday and Wednesday, with tiebreaks and the closing ceremony on Thursday. Each mini match features a pair of classical (slow) games and, if tied 1-1, tiebreaks of G/25 with 5 second delay. This format promises to be exciting!

No doubt Shankland is already a very happy camper! He is guaranteed a minimum check for $15,000 (winner earns $40,000) and he also qualified for the next World Cup (a 128 player knock-out tournament with many top players).

IM Daniel Naroditsky (see photo at right), the other Bay Area representative in St. Louis, castled short with a pair of defeats in rounds 6 and 7. He finished with 2.5/7. We'll have to call it a learning experience, while realizing that few 15 year olds even get this opportunity. Trust me, Danya will be baaaaaaaaaaack!
Posted by Michael Aigner at 2:46 PM No comments: 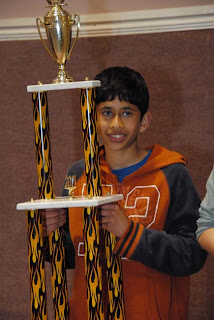 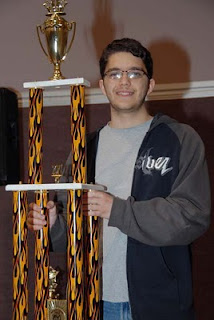 Congratulations to Nicholas Karas for taking clear 1st in High School at the CalChess Scholastic Championships on April 2-3. Although I taught Nicholas (photo at left) for the last few years, much of the credit goes to his first teacher, NM Daniel Schwarz, for inspiring him. Now finishing the final year of high school, Nicholas became my fifth student in six years to qualify for the Denker Invitational held each summer at the US Open. Good luck in Orlando!

Two of my younger students shared top honors in the Junior High division. Kudos to Neel Apte and Kyle Shin for taking home the 1st and 2nd place trophies on tiebreaks. They already tied for 1st in Elementary last year, with Neel also earning 1st place. In fact, Neel (photo at right) has captured three titles in a row, starting with 4-5 in 2009.