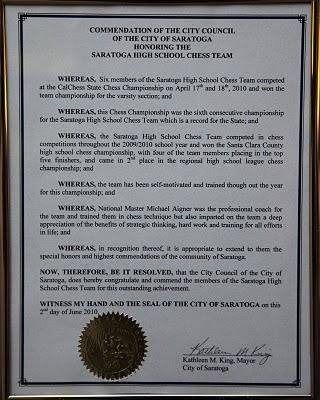 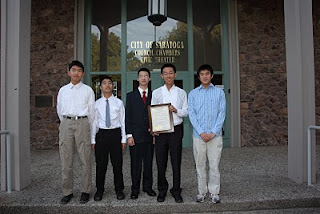 COMMENDATION OF THE CITY COUNCIL
OF THE CITY OF SARATOGA
HONORING THE
SARATOGA HIGH SCHOOL CHESS TEAM
WHEREAS, Six members of the Saratoga High School Chess Team competed at the CalChess State Chess Championship on April 17th and 18th, 2010 and won the team championship for the varsity section; and

WHEREAS, this Chess Championship was the sixth consecutive championship for the Saratoga High School Chess Team which is a record for the State; and

WHEREAS, the Saratoga High School Chess Team competed in chess competitions throughout the 2009/2010 school year and won the Santa Clara County high school chess championship, with four of the team members placing in the top five finishers, and came in 2nd place in the regional high school league chess championship; and

WHEREAS, the team has been self-motivated and trained throughout the year for this championship; and

WHEREAS, National Master Michael Aigner was the professional coach for the team and trained them in chess technique but also imparted on the team a deep appreciation of the benefits of strategic thinking, hard work and training for all efforts in life; and

WHEREAS, in recognition thereof it is appropriate to extend to them the special honors and highest commendations of the community of Saratoga. 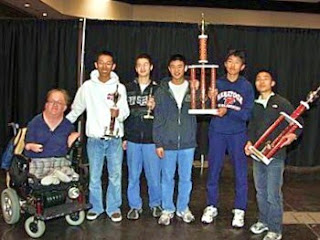 NOW, THEREFORE, BE IT RESOLVED, that the City Council of the City of Saratoga does hereby congratulate and commend the members of the Saratoga High School Chess Team for this outstanding achievement.