Here is one more video of Garry Kasparov in the Bay Area. On November 3, he spent a day at the Googleplex in Mountain View, giving a simul and answering questions at a forum. The former World Chess Champion also took time out of his busy schedule to meet with reigning World Under 18 Champion IM Steven Zierk.

Did you know that Garry was in town last week?

Yes, the 13th World Chess Champion Garry Kasparov visited two Silicon Valley companies. He gave talks at Google and Palantir Technologies, even playing a pair of simuls. The following YouTube video shows the 10 board simul at Palantir on November 1.

Speaking at Palantir, Kasparov proclaimed the Apple II computer (1977) as America's most recent revolutionary invention. Never one to shy away from controversial opinions, Kasparov believes the United States has become complacent when it comes to innovation. Read more about the lecture here.
Posted by Michael Aigner at 9:21 AM 1 comment: 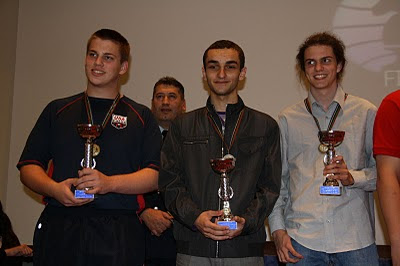 Congratulations to the three medal winners for Team USA at the 2010 World Youth!
Finally, make sure watch the last 4-minute long highlight video produced by Chessdom. I saw all three medalists plus the last round game between Samuel and Vignesh. 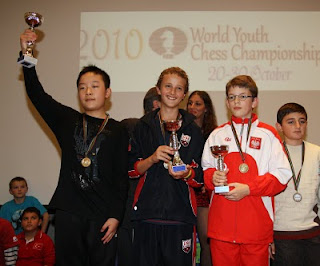 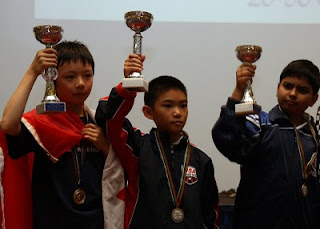 Posted by Michael Aigner at 10:34 AM No comments: