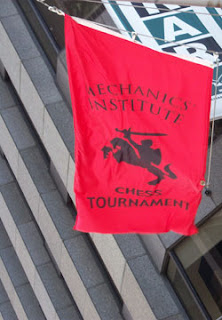 Mechanics' Institute Chess Room director IM John Donaldson passes along this note. He expects the field to be strong, including several GMs and IMs. This looks like a perfect opportunity for the top local juniors to pick up a few big name scalps.

Come honor Ray's memory and make this a great tournament! Light refreshments will be available.
Posted by Michael Aigner at 10:56 AM No comments: 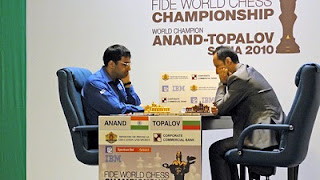 (The combatants wait patiently for the start of game 2 on Sunday.)
The most exciting chess event of the year began last weekend in Sofia, Bulgaria. This year's World Championship match pairs two well-known players who both have consistently been ranked in the top 5 for at least a dozen years. And for the first time since 1972, none of the infamous K's was present (Karpov, Kasparo 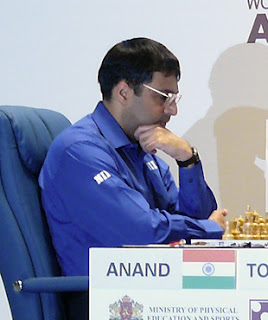 In one corner, we have the reigning 15th World Champion from Chennai, India: Viswanathan "Vishy" Anand (photo at left). Currently rated #4 in the world at 2787, he achieved a lifetime peak rating of 2803 two years ago. Most impressively, the 40 year old Anand maintained elite status since the mid 1990s, when he lost to Garry Kasparov in a 1995 title match. He became FIDE Champion in 2000 after winning a Knockout Tournament in Tehran, Iran. Alas, twelve years after first facing Kasparov, Anand finally captured the undisputed unified title by winning the 2007 World Championship Tournament in Mexico City, an eight player double round-robin. He successfully defended the throne in a 2008 title match against Vladimir Kramnik (6.5 to 4.5) in Bonn, Germany.

In the other corner stands the 35 year old challenger from Bulgaria: Veselin Topalov (photo at right). He is currently rated 2805, second in the world behind the teenage phenom Magnus C 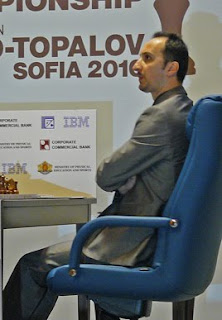 arlsen. His lifetime peak rating of 2813 has been exceeded only by Kasparov. Topalov joined the world elite in the late 1990s, a status he has held since. He became FIDE World Champion by dominating the 2005 World Championship Tournament in San Luis, Argentina, another eight player double round-robin. As the final component of the reunification of the world chess crown, Topalov earned his seat in today's match by defeating Gata Kamsky in a 2009 challenger's match by a lopsided margin of 4.5-2.5.

Grandmasters Anand and Topalov play 12 games from April 24 through May 11, with a rest day after every two games. The classical time control is 40 moves in 2 hours, then 20 moves in 1 hour, and finally G/15 plus 30 second increment starting after move 60 (maximum length = about 7 hours). Games begin at 5:00 in the morning Pacific time, but can easily last four or more hours. If the match is tied 6-6, the tiebreaks are scheduled for May 13. (Action G/25+10sec, then blitz G/5+3sec and finally a possible Armageddon game.)

Current Standings: Anand 4.0 - Topalov 3.0
You may follow the games early each morning at the official match website or live on the Internet Chess Club. When you log into ICC, type "/tell webcast listen" (for Dasher or BlitzIn only) to hear Grandmaster commentary or view the results and games in "/finger WorldChamp10". By late afternoon of each day, you may watch the "Game of the Day" video for each round (enter your ICC username and password when prompted).
Posted by Michael Aigner at 11:43 PM No comments:

"These annual scholarships awarded by the US Chess Trust, the National Scholastic Chess Foundation, and the

Well done Rohan for excelling in challenging courses at Irvington High School as much as on the chessboard! Read my blog tribute to the "Master Gambiteer" dated January 2009 and my report on the 2009 US Cadet invitational. No doubt the many skills required to checkmate will also help Rohan in other walks of life. Good luck!

Posted by Michael Aigner at 8:53 AM No comments: 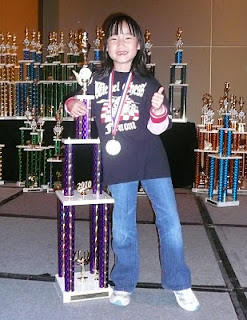 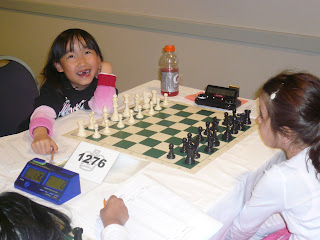 Believe it or not, the CalChess Scholastics were not the only major chess championship held last weekend. Three Bay Area girls flew to Columbus, Ohio to play in the All-Girls Nationals, hosted by the Kasparov Chess Foundation. They competed against 210 of the best girls around the country, and even managed to bring home a first place trophy!

Congratulations to 2nd grader Joanna Liu (1410) of Weibel Elementary for taking winning the U-8 division with 5.5 out of 6! She worked hard for her trophy, facing five of the top 10 in the final standings, including a pair of challenging 1300s. Joanna's proud coach Ted Castro writes that she was "doing 4-5 hours of training every week to make sure that she gets better and better" (plus 4 hours of play and coaching at Weibel). Practice makes perfect! As the photos prove, Joanna insisted on wearing her lucky old Weibel team shirt in Ohio. (Thanks to her parents for the photos above.)

Two other local girls both scored 4.0/6 to finish in the top 10. 3rd grader Alisha Chawla, also from Weibel, played up and took home the 10th place trophy in the difficult U-10 section, losing only to the top two rated players. 2nd grader Alanna Song received the 8th place trophy in U-8. Well done!

Posted by Michael Aigner at 10:58 PM No comments: 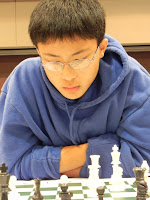 I am deeply honored to be the coach of four CalChess scholastic champions for 2010. The winners competed in three of the five Varsity sections: K-5, K-6 and K-8. Although nearly half of my private students attend high school, I was unable to claim the K-12 division this year because the masters all stayed at home. However, the Saratoga High chess team won again, now for a state record sixth year in a row! Way to go students!!! 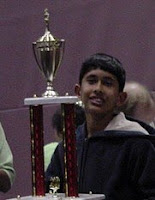 Another six private students, plus one former student, scored at least 4.5 out of 6 to earn a spot on the informal 2010 All-Fpawn Team. Kudos to Brian Wai (K-12), Arthur Liou (K-12), Edward Li (K-8), Roland Zhu (K-8), Aamir Azhar (K-8), Tudor Muntean (K-8) and Joshua Cao (K-6). Our dominance was greatest in junior high, where five of my students ended up in the top eight finishers (4.5 points or more). Likewise, we claimed three of the top six spots (4.5 points or more) in the elite elementary section. Woot!
Posted by Michael Aigner at 11:45 PM No comments: 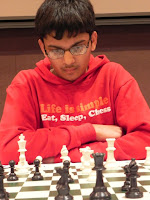 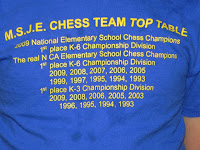 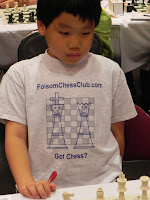 Unfortunately, I am not Superman and needed a couple of days to catch my breath after the CalChess Scholastics. It was a wild weekend; I got dizzy from keeping track of 26 private students in 4 different sections. Two of my kids took home 1st place trophies and another two tied for first! And Saratoga High School narrowly earned its sixth consecutive K-12 title! Anyways, my post-championship report is still forthcoming.

For a partial summary of what went down, check out my Twitter feed.

In the meantime, please enjoy hundreds of photos from last weekend that are online. Veteran photographer Richard Shorman uploaded a huge album of 360 pictures on ChessDryad. Organizer emeritus Alan Kirshner carried around a camera, but hasn't had time to post the pics to CalNorthYouthChess yet. I uploaded a modest number of my own photos to Flickr, primarily of players in the High School division.

The photos of chess shirts in this post are all courtesy of Shorman. If you can't read the text on the shirts, click on the thumbnail for a closer look. 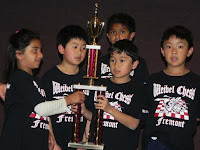 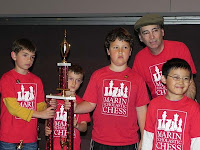 Posted by Michael Aigner at 2:32 PM No comments: 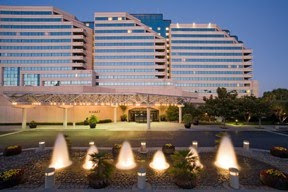 The biggest annual chess tournament in the Bay Area, the CalChess Scholastics, began this evening with the blitz side event. After six years, the tournament returns to the premiere venue in Northern California: the Santa Clara Convention Center at Great America. Thanks to a steady trickle of last minute entrants who don't seem to mind the late fee, paid attendance now stands at 890, including a total of 267 in the five Varsity sections. Organizer Salman Azhar no doubt is pleased with more entries! Counting parents, siblings, relatives, coaches and volunteers, the crowd will approach 2000 people. If you're not there, you're really missing out on pure chess bliss!

Participants compete in one of 14 sections from 1-3 Rookie (unrated) to 9-12 Varsity. Advanced and intermediate youngsters play six rounds over two days while beginners only play one day. The elite players in the Varsity divisions play G/75 to G/90, meaning a single game can take up to three hours. There are three rounds Saturday and three more Sunday (9:00, 12:15 and 3:30 on both days). The Novice, Rookie, Kindergarten divisions play only one day each, with five rounds at G/30.

I will watch my 22 private students closely (plus another half dozen former students). Several have aspirations of winning, including three of the top four seeds in 4-6 and the top three rated players in 7-8. Historically my students have dominated the High School division, but that may not be the case this year because all five of my Masters are skipping this tournament. Some have legitimate conflicts while others don't see any benefit from playing only against much lower rated opponents. Most significantly, the Denker Qualifier was held last month with FM Steven Zierk victorious. What a shame! Perhaps one of my five students seeded between 4th and 12th can step up and hit a home run.

Here are my favorites and dark horses for each of the Varsity divisions. Current and former private students are shown in red bold.
The team championships should be competitive as they always are. In the Elementary divisions, 2009 national champion Mission San Jose Elementary has won most of the Varsity trophies in recent years. But this year seems to be the best opportunity for crosstown rival Weibel Elementary to steal a title. Likewise, Saratoga High has captured five straight K-12 team titles and is looking for a record sixth in a row. Can they do it, or will Mission San Jose High end the dynasty? Stay tuned!