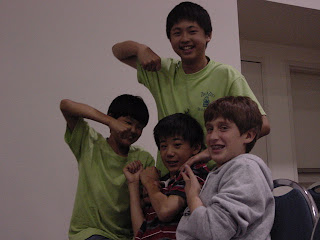 This is one of my all-time favorite posts; I am publishing it for the third time. This advice seems especially relevant

The main point is that a parent's behavior is critical for a youngster to feel confident and play well. I have seen many examples of parents discouraging their children, instead of positive reinforcement. Is it any surprise that many of the same juniors quit chess soon?

If you haven't entered the Championships yet, the regular entry deadline is Monday. If you already registered, check out the 747 advance entries here (as of Sunday).

The annual CalChess State Scholastic Championships take place this weekend. As a chess coach, I spend my time preparing juniors for the most challenging weekend of their lives. What role do the parents have? How should a parent behave at a chess tournament? I published this article last year and now is a good time to reprint it.

To start out, you should prepare your child with the necessary food and rest before and during the weekend. Make sure to get plenty of sleep; an extra hour of sleep will help a lot during the last games at the end of each long day. Of course, the kids need something big and healthy to eat for breakfast (very important) and between each game. Those players in the

older sections tend to have longer games and may wish to take a bottle of water and a small snack (chocolate, candy, or gum) with them for each round.

The hard part about the motto “try your best and have fun” is to stick to it afterward. If your child tried their best, then you must encourage them no matter what the result. Never get angry with your son or daughter simply because they lost, even to a lower rated opponent. A few common and legitimate reasons to get upset include moving too fast, lack of focus by looking at other games or failure to record the moves. Most children will be eager to talk about the game afterward and even parents who aren’t strong chess players may pick up key details (e.g. “I blundered” or “I had a win but I lost” or “I didn’t see his piece”). Be aware that even chess players who try their best might blunder and miss a move that they should have seen.

3. Parent hates child’s rival(s). Unfortunately, I see all too often when a parent measures his or her ow 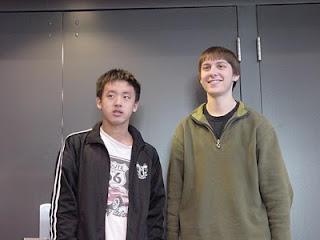 n child against the result of the rival. It is important to score more points or achieve a milestone first. The child is often forbidden to socialize with the rival, purely for competitive reasons. My response: In recent years, the best young players in the Bay Area have benefited from the interaction with their closest rivals. Masters Nicolas Yap, Drake Wang and Daniel Schwarz (at right in adjacent photo), who all graduated from High School in 2007, competed for the same trophies at the CalChess Scholastics for an entire decade, yet also forged strong friendships that included many hours of chess analysis and blitz games. The benefits of having friends in the chess community and someone to study with far outweigh any competitive disadvantage. Take the opportunity this weekend meet your child’s rivals and their parents. Set a positive example for the children to follow.

Best of luck to both the thousand players at the CalChess Scholastics and the many equally pumped up parents! Unfortunately, the chances that I will attend seem pretty low due to my severe long term illness.

Posted by Michael Aigner at 9:18 PM No comments: