Top rated Carlsen remains poised to smash the all-time record of 2851 set by his former teacher Garry Kasparov.  His next opportunity starts this weekend at the London Chess Classic, playing against three of the next five players in the rankings: Aronian, Kramnik and reigning World Champion Anand.  The top two Americans are also in action, with Nakamura participating in London and Kamsky bleeding rating points at the ongoing FIDE Grand Prix in Uzbekistan.  Three rounds before the end, the American-born Caruana shares the lead with Karjakin.  By my count, 14 of the top 20 players in the World compete in one of these two current tournaments.


Not every day does a young Norwegian man makes waves in Silicon Valley.  Nov. 16, 2012 was indeed a magical day!  Magnus Carlsen, the highest rated chess player on the planet, stopped by for a small blindfold simultaneous exhibition, Q&A and many personal photos.  Check out Facebook for photos and videos by Richard Shorman.  Thanks to IM David Pruess, Tom Langland and Bay Area Chess for putting together this memorable afternoon.
Make sure to read Mr. Langland's new article at Chess Life Online and watch the video of Daniel Naroditsky playing blitz against King Magnus.
Posted by Michael Aigner at 3:13 PM No comments:


This 12-minute long video shows the start of the final round and then highlights from the medal ceremony.  Great stuff!  Watch the 13th World Champion steal the show.
Congratulations once again to the champs.  Here they smile together for the candid camera.

Posted by Michael Aigner at 10:33 PM No comments:

Hail to the Champions!

Hail to the Champions!
And thanks to the organizers and sponsors in Slovenia.

Posted by Michael Aigner at 3:23 PM No comments:

Good luck to Team USA in the last round at 2012 World Youth!  Watch the top boards Live on Sunday early morning starting at 1:00am PST.  FM Kayden Troff (needs a win in U14) and SM Sam Sevian (needs only a draw in U12) go for the gold!!   NM Cameron Wheeler in U12, WFM Annie Wang in G10 and Christopher Shen in U8 can bring home a medal!

Several people have asked me if this is the strongest U12 section ever?  Without a doubt, this year's group is the strongest USA delegation in U12.  Back in his days competing in U10 and U12, local prodigy Daniel Naroditsky faced Illya Nyzhnyk of Ukraine (now a 2600+ GM), Ivan Bukavshin of Russia (also a GM), Srinath Narayanan of India (IM) and American Ray Robson (another 2600 GM).  It certainly seems possible that there are several future GMs and IMs lurking in U12; indeed, Sam Sevian already has two IM norms.

Posted by Michael Aigner at 8:24 AM No comments:

Chess Around the World 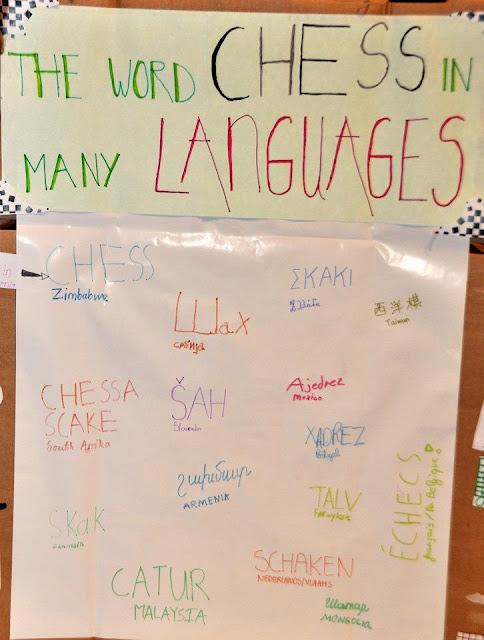 Posted by Michael Aigner at 9:56 PM No comments:


After meeting Magnus Carlsen and watching the best 11- and 12-year olds on the planet battle for gold, perhaps you wish to spend an evening watching a movie--indeed, a heart-warming chess documentary.  Starting tonight, this dream becomes reality as the popular film Brooklyn Castle makes its Bay Area debut at the Landmark Opera Plaza (601 Van Ness) in San Francisco.  Click here for a schedule of about five daily screenings.

Although it is a chess movie, the main conflict has less to do with the 64 squares and more with how an inner city school achieved success at the national level against all odds.  In an era of crippling school budget cuts, what role can a game such as chess play in the classroom, or even as an organized extracurricular activity?  For minority kids attending I.S. 318 in the Bronx, chess meant an alternative to TV, drugs and gangs.  Here is a film review from the Chronicle.

As the trailer proclaims: "Imagine a school where the cool kids are the chess team."

After the 7:15pm screening on Saturday 11/17, IM Daniel Naroditsky will host a Q&A session.  Daniel, who recently turned 17, is a former World U12 champion and now the author of two (!) chess books.

(The showtimes originally scheduled for Berkeley have been postponed.)
Posted by Michael Aigner at 2:56 PM No comments:

As the medal chase heats up at the World Youth Chess Championship, many of the Northern California participants find themselves in the mix.  After six wins in a row, NM Cameron Wheeler (7.0 out of 8) finds himself at the top of the World in U12, but another half dozen Americans remain within one point in the standings, including SM Sam Sevian (6.5) and Vignesh Panchanatham (6.0).  Among the girls, Ashritha Eswaran (6.0 in G12) and Joanna Liu (6.0 in G10) are doing extremely well to represent the Bay Area on the international stage.

Northern California Scores After 9 Rounds
(updated at 1:00pm Friday)
The final three rounds begin on Friday and Saturday at 6:00am, then Sunday at 1:00am (all Pacific time).  Check out the Pairings and Results or watch the Live Games from halfway around the globe! Go U-S-A!!
Posted by Michael Aigner at 2:13 PM No comments:

After a day of rest and sightseeing on Tuesday, the American youngsters at the 2012 World Youth returned to the task at hand: winning chess games against highly ranked opponents from around the globe.  Round 7 proved very difficult and for the first time, Team USA scored under 50% as a whole.  On the bright side, the average score of 89 players remains a solid 4.2 out of 7, or almost 60%.  The number with 5.0 or more (23) exceeds those under 50% (14).  With four rounds left, 15 contenders rank in the top 12 for their age and gender, including 4 from Northern California.  Go U-S-A!!

All eyes remain fixed on the U12 section, where four Americans will play on the top 3 boards on Thursday at 6:00am PST.  Highest rated SM Sam Sevian (NCal) assumed the lead at 6.5 with a crushing Sozin Sicilian win against his teammate and second seed, FM Jeffery Xiong (Texas), who now has 5.5.  Also in the mix at 6.0 are underrated Bryce Tiglon (Washington) and NM Cameron Wheeler (NCal).  Four more Americans have 5.0 and could still end up in the top 10 with a strong finish.

The U12 section is not the only one with Americans prowling among the leaders.    Four girls in G10 stand in the top 11, led by Jennifer Yu (Virginia) with 5.5.  Aasa Dommalapati (also from Virginia) is second in G8 with an undefeated 6.0.  For the boys, Aravind Kumar (New Jersey) and Christopher Shen (Ohio) have 5.5 each in U10 and U8, respectively.  Best among the teenagers, Kayden Troff (Utah) and Agata Bykovtsev (SCal) have 5.5 each in U14 and G14, respectively.

Posted by Michael Aigner at 4:26 PM No comments:

Major props to IM David Pruess and Bay Area Chess for organizing the event of the year on short notice.  Believe it or not, the 21-year old Norwegian super-GM will visit Silicon Valley this coming Friday!  The free meet and greet is geared towards children, but a limited number of adults may attend.

Back in 1999, then World Champion Garry Kasparov drew an overflow crowd at Stanford.  His protege Carlsen now stands just 3 points away from breaking Kasparov's all-time record rating of 2851.  For most people, this is a unique opportunity to meet a living legend face-to-face!

Thank you to America's Foundation for Chess and Silicon Valley Bank for sponsoring Carlsen's Bay Area visit.
Posted by Michael Aigner at 7:52 PM No comments: 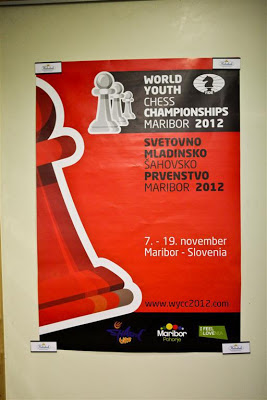 After five days of intense chess, the World Youth Chess Championship reached halftime.  Over the first six rounds (yes, the fifth day had two rounds), the competition metaphorically separated the men from boys and women from girls.  The contenders have moved to the head of the crowded field.  The Americans have fared well to date: 26 of 89 kids scored 4.5 (75%) or better, including 7 of 13 from Northern California.  Here we go Team U-S-A!

Despite this good news, nobody wearing the stars-and-stripes has a perfect 6-0 score, and most players already lost at least once.  It is a really tough event!  After half a dozen years of closely watching the results at World Youth, I have drawn a few conclusions.  The two toughest countries overall tend to be Russia (no surprise) and India (surprise).  Apparently some national coaches organize extensive training programs just to prepare for this one event.  However, skill and preparation alone are insufficient to reach the top of the world.  Those who bring home the medals invariably are physically and mentally tough enough to handle this high level of competition.  Rarely does someone manage to taste success the first time.

The tournament takes a well-deserved rest day on Tuesday 11/13.  Many players, parents and coaches go on sightseeing tours near Maribor, both in Slovenia (or here) and across the nearby border to Austria.  The kids, of course, will continue to talk, eat and breathe chess.  After all, five more rounds remain to be played, from Wednesday through Sunday 11/18.  The American delegation will fly home just in time for Thanksgiving.

The championship has actually been easy to follow online this year, even with an active Facebook page.  My favorite links on the official website include Live Games (starting at 6:00am PST) and two rotating Webcams, one in each playing hall.  The top 10 boards in all sections except U8, G8 and G10 are broadcast live!  Fans of Team USA should surf in on Wednesday morning to watch the two highest rated players in the world U12 square off (Sam Sevian vs Jeffery Xiong).  While munching on breakfast, you may also watch and cheer for Cameron, Ashritha, Joanna, Balaji and Ben.  Good luck to the California boys and girls!

Posted by Michael Aigner at 10:13 PM No comments:

The World Youth Chess Championship 2012 began this afternoon in Maribor, the second largest city of the former Yugoslav republic of Slovenia.  Out of nearly 1600 juniors from around the world, a record 87 came from the USA, including 13 from Northern California.  Through November 18, players will compete for 11 rounds in sections segregated by age (U8, U10, U12, U14, U16 and U18) as well as gender (Open and Girls).

The Bay Area has a rich history of success at this tournament.  In the past five years, three local talents have finished at the top of the world for their age!  Daniel Naroditsky captured gold for U12 in 2007; Sam Shankland shared first for U18 in 2008; and Steven Zierk took gold for U18 in 2010.  Daniel and Steven both now hold the IM title while Sam rocketed to Grandmaster and an impressive 2600 international rating.  Who will step up to continue the magic in 2012?

Here are the local participants in Maribor:
Team USA hopes to build on the results from last year: one gold and one silver, with ten players finishing in the top 10 for each division. This year's squad appears to be strongest in the U12 section, with SM Sam Sevian and FM Jeffrey Xiong rated at the very top of the entire field.  They are not alone; indeed 14 of the top 40 in U12 wear the red, white and blue.  In the U10 section, NM Praveen Balakrishnan and 2011 U8 gold medalist FM Awonder Liang are both ranked in the top 5.  The top contenders among the girls include Ashritha Eswaran of Northern California in U12 and WFM Annie Wang of Southern California in U10.

The official website contains links to pairings and standings (filter by Federation = USA) and many live games (starting at 6:00am PST for most rounds).  For a quick overview of Team USA, check out the Chess-Results website.  For daily news and reports from Maribor, surf to Chess Life Online and the blogs for Cameron Wheeler and Vignesh Panchanatham.
Posted by Michael Aigner at 11:23 PM No comments: