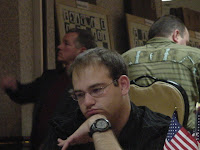 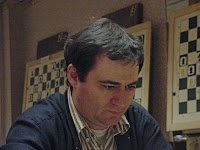 The San Francisco Mechanics kick off the fifth US Chess League season against the Seattle Sluggers. Tonight will be the lone meeting this year between these two traditional rivals, unless they meet again in the playoffs. The top boards, Grandmasters Josh Friedel and Gregory Serper, have met five times with white winning every game, a trend that bodes well for the home team. This week is also the debut of 12-year old master Yian Liou, but he faces a difficult opponent in NM Joshua Sinanan. Let's go Mechanics!

The games take place at the Mechanics' Institute, but readers may watch LIVE on the Internet Chess Club beginning at 6pm Pacific time. Type: "/finger USCL" for links or finger each of the players: Friedel-SF, Pruess-SF, Donaldson-SF or Liou-SF.

Round 1 lineups (San Francisco in red with latest ratings from MSA)
Final score: 2.0-2.0

Yours truly has been selected by the US Chess League commissioner IM Greg Shahade to help judge the Game of the Week for each round. I am one of five judges. Winners earn cash prizes of $150, $75 and $50 per week. Sorry Josh, bribes will not be accepted.
Posted by Michael Aigner at 12:24 PM No comments:

The US Chess League begins on Monday night with three dynamite matches. The one most likely to attract attention on the west coast will pit the San Francisco Mechanics against division rival Seattle Sluggers. While Seattle's top board GM Hikaru Nakamura will no doubt be unavailable because he is playing in Holland at the Rising Stars Versus Experience tournament, the Sluggers still have solid GM Gregory Serper, star teenager FM Michael Lee and a diverse supporting cast.

With what lineup will the Mechanics counter? First read about the 2009 team roster in this post from two weeks ago. Next check out intriguing possibilities:
(The first number is the official rating, using the September 2008 list. This average must be below 2401 each week. The second number is current USCF average.)

Log into ICC next Monday evening to watch LIVE beginning at 6:00pm PDT. Type the command "/finger USCL" to find the games, or look under the Events window.

US Chess League Schedule for San Francisco Mechanics
Posted by Michael Aigner at 12:40 AM No comments:

Tanuj Captures Gold at Pan Am Under 8! 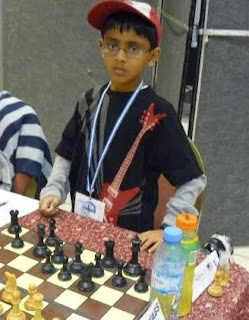 South America, you've just been Tanuj'ed! With the final round yet to be played tomorrow, Bay Area star Tanuj Vasudeva (1902 USCF) already clinched the gold medal for U-8 at the 20th Campeonato Panamericano de Ajedrez. After winning his first eight rounds, the only remaining question is whether he can complete a perfect 9-0 sweep. Even more impressively, several of his games have been miniatures (under 25 moves). Kudos to Tanuj on winning your first international tournament!

Update on Friday morning: Tanuj finished with an impressive 9-0 sweep!

(The photo at left from the official website shows our young hero practicing the classical Sicilian against an unidentified victim.)

For first-hand insight on this adventure to Mar Del Plata, Arg 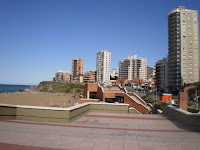 entina (see photo of the beach at right) and the experience of playing chess in another country, check out the blogs by Tanuj and Girls U-10 gold medalist Simone Liao (1847 USCF) from Southern California. While the parents help out with the blog, they try to report from the perspective of their child.

The final round takes place on Friday morning, with the awards ceremony to follow. In addition to Tanuj and Simone, the 23 member American delegation has good chances to pick up more medals in Girls-8, Boys-10, Boys-12, Boys-14, Boys-16 and Girls-18.
Posted by Michael Aigner at 5:08 PM 1 comment: 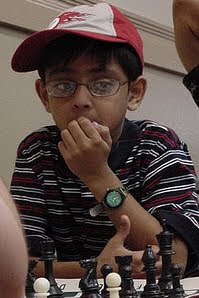 CalChess star Tanuj Vasudeva traveled to Argentina to compete in the Pan American Youth Chess Festival. As the highest rated 7-year old (now age 8) earlier this year, he earned the right to represent the USA in Mar Del Plata. He faces some elite kids age 7 and 8 from throughout South America plus Mexico. Undoubtedly, none of the Latin American kids have the vast experience that Tanuj amassed over the past two years in Bay Area events!

So far, so good! Tanuj won his first three rounds, including today's showdown against a 1966 FIDE rated player from Colombia. Only two have 3-0, and Tanuj is paired versus a Mexican kid in a battle for the early lead. Go Tanuj!!

There are 23 kids in the American delegation, accompanied by their parents and four coaches. Other notable participants include Tommy He (3-0), Jarod Pamatmat, Arthur Shen (3-0), Victor Shen, Vincent Huang (3-0), Simone Liao, Alisa Melekhina and Courtney Jamison.
Update on Wednesday afternoon: After three more wins against the top competition, Tanuj has 6-0 and a 1.5 point lead on the field. Thanks to awesome tiebreaks, he mathematically clinches the gold medal with 1.5 in the last three rounds.

San Francisco Mechanics Gear Up for US Chess League

The San Francisco Mechanics finalized their roster for the upcoming season of the US Chess League. Can the local team add to a rich tradition that includes four straight winning records and the 2006 league title? To find out, watch beginning August 31 live on Wednesday (occasionally Monday) nights at the Mechanics' Institute Chess Club or follow the games at the Internet Chess Club. Of course, I plan regular reports on this blog and my Twitter page.

2009 San Francisco Mechanics' Roster (first rating is 9/08; second is current)Each week, the captain chooses four players with an average rating under 2401. Most of the key participants return from last year. The Bay Area's top rated player, GM Josh Friedel, will man the top board for a majority of the matches. GM Vinay Bhat and 2008 World U18 co-Champion IM Sam Shankland (with two GM norms) are two of the more successful players in the history of the league. 2007 World U12 Champion FM Danya Naroditsky and 2008 US Junior co-Champion NM Gregory Young offer a lethal one-two punch on boards 3 and 4. The captains are Mechanics' Institute chess director IM John Donaldson and Berkeley's own IM David Pruess.

eam adds two new faces. At the top, GM Jesse Kraai will see action on board 2 and perhaps even a couple of games on board 1. And on board 4, CalChess High School co-Champion NM Yian Liou (see photo at left) may be San Francisco's secret weapon. "Kiddie" is only 12 years old, but has already proven himself against the best that California has to offer. Continuing the Mechanics' tradition of fielding underrated juniors, Yian counts as merely 2019 for the league, while his actual rating is nearly 200 points higher at 2212. These rating points are valuable because they allow the team to field stronger players on the top boards without sacrificing strength on board 4.

For more information, check out the official San Francisco Mechanics homepage or browse through the 2009 US Chess League schedule.
Posted by Michael Aigner at 11:35 PM 1 comment:

US Open in Indianapolis! 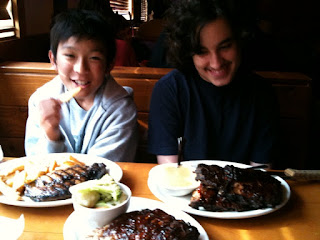 (Chess makes you hungry! Kyle Shin and Evan Sandberg chow down between rounds.)

The 110th US Open attracted about 450 chess players to Indianapolis, including 10 Grandmasters and 13 International Masters. A number of high profile players came to compete for five qualifying spots available for next year's US Championship. The three different schedules (9-day, 6-day and 4-day) merged tonight, leaving four players at the top with 6.0 out of 7: Grandmasters Sergey Kudrin, Alex Yermolinsky, Alexandra Kosteniuk and Alex Lenderman, International Masters Michael Mulyar and Ron Burnett plus rapidly improving teenager Jonathan Hilton. One additional celebrity in attendance is the 2009 US Champion GM Hikaru Nakamura, who hosted a simul today. The festival wraps up with rounds 8 and 9 on Saturday and Sunday, respectively.

Unfortunately, only nine Bay Area players made the trip East this year, plus one or two more will attend the political meetings this weekend. Here is the local scorecard: 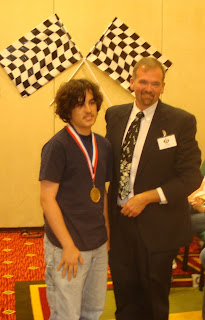 CalChess K-12 co-Champion Evan Sandberg flew to Indianapolis last weekend to compete in the prestigious Arnold Denker Tournament of High School Champions. For more than 20 years, this 48 player invitational has featured many of the best high school players from around the country, one from almost every state. Recent representatives from Northern California included masters Nicolas Yap, Daniel Schwarz and Steven Zierk. This year became Evan's turn after he tied for top honors at the CalChess Scholastics in San Jose. No playoff was necessary because co-champion NM Yian Liou was too young to play in the Denker.

Evan definitely played his heart out in one of the toughest tournaments around the country, but a ro 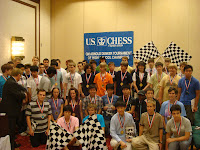 und 2 defeat on board 1 ended his chances of winning. Having attended in the past two years, I can definitely say that the competition is fierce; there are simply no easy games, even against lower rated opponents. In the end, Evan tied for 5th through 13th place with three wins, two draws and one loss (4.0/6). He had a few ups and downs, but still ended up with a respectable finish as the third lowest rated out of those in the top 13.

Click here for the rating report or check out the story by champion Abby Marshall! (Photos of Evan and all of the Denker participants taken by Joel Sandberg.)
Posted by Michael Aigner at 7:53 PM No comments: 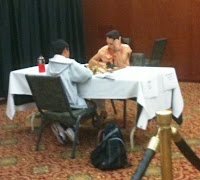 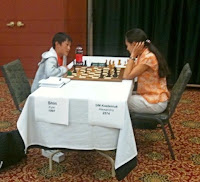 Bay Area 11-year old Kyle Shin got the pairing of his life today at the US Open in Indianapolis. In round 2 of the 4-day schedule, he played one on one against Women's World Champion GM Alexandra Kosteniuk! Reportedly, Kyle (now rated 2095) even had a decent position, attracting an audience that included several titled players. At the end, the World Champion prevailed against the National 5th Grade Champion. Nonetheless, it was quite a memorable experience for Kyle's first tournament game against a Grandmaster! (Photos taken by Kyle's father.)

Quote from Kosteniuk's chess blog: "The second game was one the toughest of the tournament. I played Black against a talented young boy Kyle Shin."

Check back on Friday for further updates from the US Open, including how Evan Sandberg finished in the Denker Tournament of High School Champions.
Posted by Michael Aigner at 8:07 PM No comments:

Chess Kids, The Next Generation 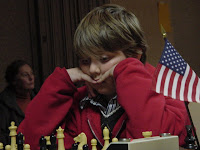 Here's just a brief list of upsets in the Open section on Saturday:
As a coach, I take special pride in watching my students do well. A total of eight of my private students and ten summer class students played! It was a real pleasure meeting everyone face to face, in some cases for the first time. Here are the top results:

Posted by Michael Aigner at 10:02 PM No comments: 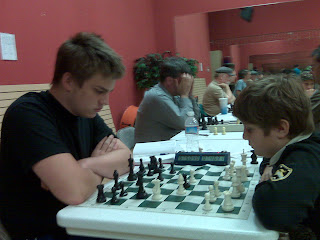 The Silicon Valley Challenge #7, held on the August 1st, 2009, attracted a total of 43 players to the Century Arts Alliance Foundation near the Great Mall in San Jose. Snacks and bottles of water were complimentary as usual and participants helped themselves between rounds.

Neel Apte won the first prize for U1700 and gained 34 rating points for his impressive performance. Also, congratulations to Armaan Kalyanpur who won second prize.

There were 11 players in the U1600 section. Bryan Huang took clear first by an entire point, winning all of his games! Congratulations to Rahul Mohan for the second place and to Vignesh Varadarajan and Colin Ma for taking the U1000 prizes.

Thanks to everyone for participating in the Silicon Valley Challenge. Special thanks to Colin Ma for donating scoresheets and Michael Aigner for his help with tournament preparations. Future events will always be publicized on the Sun Chess Club website and emailed to previous participants.
Posted by Michael Aigner at 5:00 PM No comments: