The World Youth Championships in Greece have passed the midway point.  Ten out of 22 Bay Area participants have maintained a Plus-2 score through Round 6, with another seven sitting at Plus-1!  The masters Andrew, Cameron, Rayan and Ashritha are leading the local delegation by example.  Five more rounds remain.  Go U-S-A!

Bay Area Juniors at World Youth
(Updated after Round 6)


N.B. All ratings above are FIDE.  I am tracking a pair of players (Hans Niemann and Joanna Liu) who have ties to the Bay Area chess community, but now live out of state.
Posted by Michael Aigner at 2:40 PM No comments:


Team USA Statistics
(Updated after Round 5)


Congratulations to masters Justin Wang (Open U10) of Texas and Carissa Yip (Girls U12) of Massachusetts for winning the first five rounds!  FM Cameron Wheeler (Open U16) and NM Andrew Hong (Open U12) lead the Bay Area contingent with 4.5 each.  Rest day on Friday.  The tournament resumes on Saturday.

Top Individual Results
(Updated after Round 5)


N.B. All ratings above are FIDE.  Includes players with a score of plus-2 or higher (with one exception).  Bay Area in orange.  Check back for periodic updates.  Photos from the official Chessdom photo gallery.
Posted by Michael Aigner at 8:44 AM No comments:


Team USA Statistics
(Updated after Round 3)


Top Individual Results
(Updated after Round 3)


N.B. All ratings above are FIDE.  Includes only players with a score of plus-2 or higher.  Check back for periodic updates.

Posted by Michael Aigner at 2:47 PM No comments:

Young chess players from the Bay Area comprise one-sixth of Team USA at the World Youth Festival in Greece.  Four masters lead the local representatives: FM Cameron Wheeler (silver medal for U12 at 2012 World), FM Rayan Taghizadeh (bronze medal for U12 at 2014 World), WIM Ashritha Eswaran (winner of both 2015 US Junior Girls and 2015 Pan Am Junior Girls) and NM Andrew Hong (champion at 2015 US Elementary K-6 as a 4th grader).  Overall, 13 boys and 9 girls, together with their dedicated parents, made the trip from San Francisco to Halkidiki.  They will participate in every age group except U18.

Nine out of 22 Bay Area kids have achieved a perfect score through Round 2!!

Bay Area Juniors at World Youth
(Updated after Round 2)


N.B. All ratings above are FIDE.  I am tracking a pair of players (Hans Niemann and Joanna Liu) who have ties to the Bay Area chess community, but now live out of state.  If I omitted any other local kids playing in Greece, please contact me ASAP.
Posted by Michael Aigner at 1:40 PM No comments: 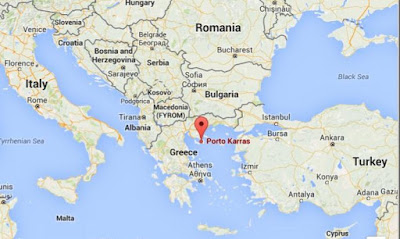 The annual World Youth Chess Championships kick off this weekend in Porto Karras, a coastal resort in the Halkidiki region of northern Greece.  Most Americans flew on Thursday, arriving on Friday in Thessaloniki via a stopover in western Europe.  Team USA consists of a record 129 participants, supported by a dedicated army of parents and coaches.  Overall, approximately 1600 players from more than 90 countries have registered, considerably more than South Africa in September 2014 and a modest increase over the same venue in October 2010, but less than United Arab Emirates in December 2013.

Girls and boys compete separately in six age divisions.  The largest sections are in the U10, U12 and U14 age groups, each numbering over 180 boys or 110 girls.  In a change from past years, there will be no double round.  Thus, the schedule calls for 11 rounds over 12 days, including a rest day.  Rounds begin at 3pm Greek time, 6am Pacific daylight time (5am after November 1).  Traditionally, the boards in each section will be broadcast live.

Despite stiff competition from Russia and India, the American delegation has achieved modest success in recent years.  For five straight years, Team USA has earned a gold medal!  The best team result of 4 medals came in 2012, when future GMs Troff and Sevian captured gold in U14 and U12, respectively.  In each of the past two years, the squad won a pair of medals, including one gold.

How will Team USA fare in Halkidiki?  Players must recognize that the tournament is like a marathon, and one bad game does not mean disaster.  Indeed, 8.5 may be sufficient to win a medal!  Check out the following list of the top rated Americans in each section.  N.B.: Ratings mean little for the youngest divisions; indeed many participants do not even have an international rating yet.


Whom to Watch on Team USA

For the latest news, check out the official Twitter feed @fidewycc2015.  Dozens of photos daily at Chessdom Photo Gallery.