In the first week of the 2014 US Chess League, the San Francisco Mechanics (0.5 MP, 2.0 GP) split four decisive games against the Rio Grande Ospreys (0.5 MP, 2.0 GP).  Vignesh Panchanatham and Siddharth Banik capably vanquished much lower rated opponents. Check out Siddharth's tactics in a razor sharp line of the Schliemann Defense.  Needing only to draw, both Daniel Naroditsky and Yian Liou lost to strong Grandmasters on the top two boards. Kudos to the Ospreys for splitting their inaugural league match!

The Mechanics square off against longtime rivals Seattle Sluggers (0.0 MP, 1.0 GP) next Tuesday night.
Posted by Michael Aigner at 9:10 PM No comments: 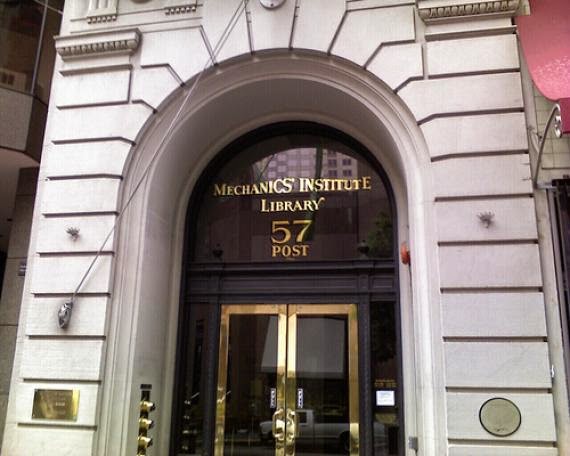 The 10th season of the US Chess League kicks off this week!  The defending champion Miami Sharks face stiff competition from St. Louis ("Arch Bishops" feature three 2700s), New York ("Knights" star US Champion Gata Kamsky) and more than a dozen other cities around the nation. The league expanded to 18 teams, adding squads from Atlanta ("Kings") and Rio Grande ("Ospreys" from Brownsville TX).  The season stretches 10 weeks through the end of October, with 4 rounds of playoffs culminating in the Championship Match on December 3.  Teams will battle in three divisions (East, South and West), with the Top 3 in each, plus one 4th place, qualifying for the playoffs.

The San Francisco Mechanics joined the USCL in the inaugural season and have reached the playoffs in 7 out of 9 years.  Playing at the historic Mechanics' Institute, the club won the 2006 league championship, but also lost three times in the semifinals, including last year to the Sharks.  Team captain IM John Donaldson has successfully relied on one strategy while recruiting the roster each year: fill the lower boards with underrated juniors.  Case in point: the talented junior Daniel Naroditsky, who recently broke 2600 FIDE rating, will play for the 9th straight year, progressing from bottom rated in 2006 up to first board.

The youthfulness of the San Francisco delegation jumps right out.  If you still consider 18-year old  Daniel as a junior, then the kids comprise 2/3 of the team!  The first round lineup (1-4-6-8) is one of the youngest in league history--an average age under 16.  Incredibly, the average August rating of 2430 still ranks among the highest for Week 1.  In fact, captain Donaldson can select from an assortment of lineups ranked above 2400 by platooning the Grandmasters on board 1 and substituting on boards 3 and 4.  The Mechanics can even field two GMs, balanced out by the rapidly improving expert Hans on board 4.  The three strongest (legal) lineups appear to be (1-4-7-8), (1-5-6-7) and (1-2-5-9), each rated between 2434 and 2440 USCF.

The US Chess League returns to the Internet Chess Club (ICC) this fall, with games scheduled on Tuesday and Wednesday evenings of every week.  Good luck to the Mechanics as they face the expansion team from the Rio Grande on Wednesday, August 27 at 5:30pm.
Posted by Michael Aigner at 12:53 PM No comments:


The beginning of each academic year gives students time to review their personal goals for chess lessons.  The following list appears at my teaching website: www.fpawn.com.

Posted by Michael Aigner at 3:54 PM No comments:

Interview with GM Shankland at Olympiad


GM Sam Shankland has been the hero of Team USA and one of the biggest stories of the Tromsø Olympiad as a whole.  Not only did he achieve the best result on Board 5 (alternate) to date, his FIDE performance rating after the penultimate round places him third in the entire competition, behind only elite Grandmasters Veselin Topalov and Yu Yangyi!

One surprising factoid from this interview is that "Shanky" participated in his first chess tournament shortly before his 12th birthday.  Indeed, I remember him sporting a 1600 rating at his first National Open ten summers ago.  These days, the average 8 or 9 year old chess player seems to sport a 1600 rating.  Sam worked hard at chess (5000 standard games on ICC within 15 months) and reached master in less than 2.5 years!  Unfortunately, 2200 would not impress Vishy Anand, who famously said "nowadays, when you're not a Grandmaster at 14, you can forget about it!"

In the interview, Shankland speaks highly of both the Berkeley Chess School and the Chess Club and Scholastic Center of Saint Louis.

Good luck to Sam and the rest of Team USA at the final round of the Olympiad on Thursday at 2AM Pacific time.  Note that Wednesday is a rest day.
Posted by Michael Aigner at 7:29 PM No comments:


As the 2014 Chess Olympiad in Tromsø, Norway begins its second week, the tension mounts both on and off the boards.  Teams from roughly 170 nations traveled to this remote locale north of the Arctic Circle despite sporadic flight delays, visa hassles and even threats of terrorism.  The host city has drawn positive reviews, especially for the beautiful scenery amidst water and mountains.  A few complaints included the FIDE zero-tolerance rule at the start of rounds and the use of portable toilets instead of more permanent facilities  For fans back home, the live coverage seems quite thorough.

After 7 rounds, a clear leader has emerged in both sections.  In the Open division, Azerbaijan (13 MP) defeated Cuba (11 MP) and moved 1 match point ahead of China (12 MP) and three other teams.  One big surprise is the Czech Republic (12 MP), which stunned top rated Russia (10 MP).  In the Women division, defending champion Russia (14 MP) knocked off top rated China (12 MP) to establish a 2 match point advantage over three teams.

The American delegation has seen ups and downs during the first seven rounds.  Both the men and women have won five matches.  However, each squad lost in third round (the men to Holland, the women to top rated China) and have since drawn an additional match, for a total of 11 match points out of a possible 14.  The men find themselves in 14th place, ahead of top ranked Russia, but the women stand in 7th place thanks to superior tiebreaks.  With four rounds to go, Team USA remains in contention for the medals, but must finish very strong.  No doubt 17 or 18 match points will be necessary for a spot on the podium, leaving almost zero room for error.

Posted by Michael Aigner at 9:40 PM No comments:


The 40th annual People's Tournament took place at the Santa Clara Convention Center on the last weekend of July.  One of the Bay Area's oldest chess traditions, this event has survived changes in organizer and location in recent years.  My first People's dates back to 1995, when I was still a naive B player.  Every President's Day weekend, chess players young and old would meet at UC Berkeley for three days of mental gymnastics and listening to bongo drums.  The traditional venue, Pauley ballroom, offered a spectacular view of historic Sproul Plaza and the Campanile.  The tournament shares its name with People's Park, a nearby public park dating back to the protests of the 1960s.

Unfortunately, the chess community could not secure this breathtaking venue once student leaders moved on.  I won a hastily organized People's Replacement event of 2008 in Santa Clara.  The 35th edition in 2009 was the last at Pauley.  Subsequent years saw the tourney take on a nomadic existence under the auspices of Bay Area Chess, moving to Concord, Fremont, Pleasanton and finally to Santa Clara.  The dates also changed from February to July, avoiding a conflict with the popular Amateur Team West national championship.

This historical perspective brings us to the 2014 People's Tournament at the Santa Clara Convention Center. Roughly 175 chess enthusiasts and (for many) their parents participated in a weekend of mental gymnastics, minus the bongo drums.  The drummers were replaced by 30,000 fanatic 49ers season ticket holders attending the open house at brand new Levi's Stadium.  I cannot name any other chess tournaments held across the street from a major sports stadium!  The venue also lies adjacent to the Great America water park, which offers an evening fireworks show to complement the explosive tactics on the chess boards.

Believe it or not, some people even played chess!  The top seeds, GM-elect Darwin Yang and IM Andrey Gorovets, travelled all the way from Texas.  Both finished in the money, but were surpassed in the final standings by a third Texan, SM Faik Aleskerov.  (Participants at master camps during July should recognize their coaches Andrey or Faik.)  A pair of California IMs, John Bryant and Vladimir Mezentsev, joined the 4-way tie for second behind Aleskerov.  The Bay Area youth attended in full force, with no fewer than ten players under 18 (mostly teenagers) and rated in the 2100s.  Amazingly, most of these talented experts gained rating points--at the cost of everyone else!  A special recognition goes to 10 year old Josiah Stearman, who shared top U2300 honors by vanguishing two tough emeritus NMs on the third day.

I turned in a successful result with an undefeated 4.0 out of 6 score.  This was my first performance above 2400 in more than six years, ironically since People's Replacement in 2008!  Actually, almost everything started badly, when I miscalculated a strong combination in Round 1 and could have resigned by move 25. Somehow, the high school student missed several tactics and traded into a drawn pawn endgame, which I botched three times (!) until he offered me a draw!?!?  I felt awful about my play, yet fortunate to have a half point.  I managed to recover and win two of the next three games, all against mid-expert level opponents. On the third day, I faced IM Andrey Gorovets and GM Enrico Sevillano, both rated over 2550, and earned two fighting draws.

Read full annotation of the Gorovets game on my website.

Thanks to Bay Area Chess for rescuing a tradition and to NM Richard Koepcke for capably directing over three long days, despite occasional periods of chaos.
Posted by Michael Aigner at 10:18 PM No comments: