A friendship scholastic chess match between CalChess and South Africa is scheduled for Saturday morning. The games on the Internet Chess Club will begin at 8:00am San Francisco time, which is 6:00pm in Johannesburg. Eight kids from each team will square off, playing two 45 5 games that may take up to three hours. Most of the participants are 12 to 14 years old and rated between 1500 and 1800.

Posted by Michael Aigner at 10:22 PM No comments: 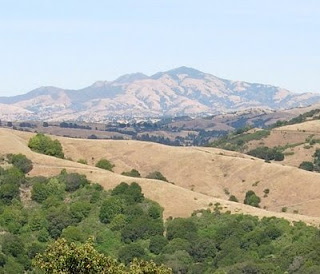 Bill Goichberg is coming to town! As the founder of the Continental Chess Association and the current USCF President, Goichberg is well known for successfully organizing chess tournaments around the country, including the aptly named World Open. However, until now, the only CCA events on the west coast have been in Los Angeles and Las Vegas.

The Western Chess Congress on March 6-8 changes all that. This event will be located at the Concord Hilton in the shadow of Mt. Diablo (see photo above). Those of us old enough will recall that the 1995 US Open took place at the same hotel. That was, sadly, the last high profile adult tournament held in Northern California. Since then, only the annual CalChess Labor Day Championship has consistently drawn over 150 players, including multiple GMs and IMs.
In fact, the details for this tournament look much like the Agoura Hills events that many local players have attended in recent years. Let's hope that some of the LA players will come north for a change. If the Bay Area can support this event, then it may be the start of a longterm commitment. In fact, Goichberg plans to hold this event as a 7 round swiss on the Martin Luther King weekend in January beginning next year. Be there!
Posted by Michael Aigner at 1:48 PM 1 comment:

Northern California will engage in a friendly internet match next Saturday against a group of juniors from the country of South Africa. Chess is a game played worldwide, yet most players never compete against someone from another country. In 2006, about 25 local kids took on the entire continent of Australia, winning by a handsome margin. This year's match will be smaller but hopefully just as enjoyable as the last one.
If you are interested in playing on the CalChess team, send email to michael AT fpawn DOT com. Include your real name, age, USCF rating and ICC username. Make sure that you can wake up in time to log in at 7:45 on Saturday morning! In putting together our team lineup, I will give priority to players who have ICC experience.

If you are interested, please email me ASAP so that I can put together our lineup. 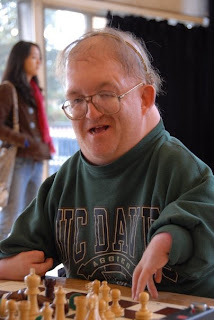 Many of my readers have wondered what happened to this blog. Five weeks have passed since my last post. Did I give up blogging? Did I quit chess? Is something else seriously wrong?

Fortunately, I can assure everyone that rumors of my demise are greatly exaggerated. Yes, I was sick for a while with nagging cold/flu symptoms. I also felt sad and burned out and wanted a little time simply to "chill" and recharge my mental batteries.

As the recent photo by Richard Shorman of ChessDryad at left proves, my enthusiasm for chess has not waned. I maintain a busy weekly teaching schedule with only occasional interruptions. Despite heavy rain on President's Day weekend, I joined 11 students and about 90 other chess enthusiasts at the People's Tournament in Berkeley. IM David Pruess beat me and won the Open section ahead of five other masters. Kudos to National 5th Grade Champion Kyle Shin for winning the U2200 section and to Saratoga High School senior Jeff Young for finally earning the rank of Expert! During February and March, I also participate in the annual Sacramento Chess Club Team Championship; unfortunately, neither my

team (Elk Grove) nor I have played terribly well so far.

In other CalChess news, Samyukta Bhat (see photo at right) scored an undefeated 4.0/5 to take clear first for K-12 at the CalChess Girl's Championship, thereby earning our state's qualifying spot in this year's Susan Polgar National Invitational for Girls in Lubbock, Texas on July 26-31. Rebekah Liu plans to attend the same invitational after winning the high school section of the Susan Polgar National Open in Glendale, AZ. Goooo girls!

I will try to catch up with some stories over the next week. Please check back soon!
Posted by Michael Aigner at 6:32 PM 1 comment: