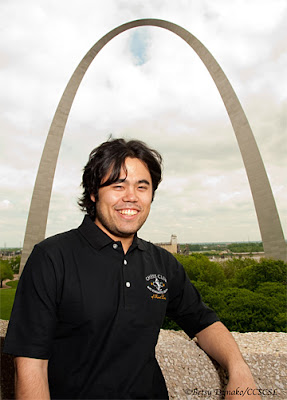 The 2010 US Championship began on Friday at the Chess Club and Scholastic Center of Saint Louis. Thanks to club sponsor Rex Sinquefield for backing a most generous prize fund of $170,000, including $35,000 for 1st place and $3,000 minimum for last. The novel format is a nine round swiss with one major variation. After round 7, the top four players split from the main swiss and face off in a round-robin quad to determine the top prizes. The "Final Four" plays ten games to determine the national champion while everyone else completes the nine round swiss, with the winner earning 5th place. This ensures that the best players face each other at the end.

The field of 24 participants includes all of America's top Grandmasters, a few older veterans and the brightest young talent. Will defending champion Hikaru Nakamura (photo by Betsy Dynako at top right) flex his muscles to become the first repeat winner in 25 years? Or will fellow Olympiad team (photo by Mike Klein below) members Gata Kamsky, Alex Onischuk, Yury Shulman and Varuzhan Akobian snatch the top honors? Or perhaps one of the three talented teenagers will surprise everyone, like last year when Robert Hess took 2nd place. 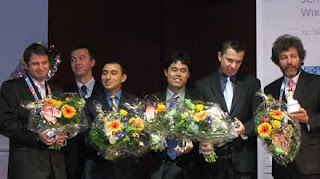 Of course, many readers of this blog will cheer for the California players. Vinay Bhat has come home after spending more than a year traveling the European chess circuit. Gaining 73 FIDE rating points in the past 9 months, he may be a dark horse to surprise everyone. CalChess State Champions Sam Shankland and Jesse Kraai both have the potential to beat anyone, but it is unclear if they can maintain that high level of play over the full 9 or 10 rounds. Many Bay Area chess fans still consider 2-time US Champion Alex Yermolinsky as a local hero, although he moved to South Dakota a few years ago. Finally, Melik Khachiyan of Los Angeles has developed an pool of students from Northern California. 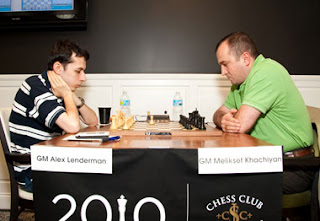 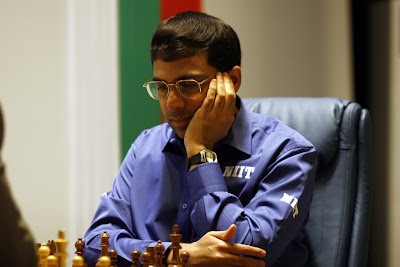 Congratulations to Anand!
This morning, 40-year old Indian Grandmaster Viswanathan Anand successfully defended his world chess title by defeating challenger Veselin Topalov of Bulgaria. The 12 game title match ended in a narrow 6.5-5.5 score after Anand won today's final game as black. This was the only game that the player of the black pieces won; white had already won four games--two by each participant. This title defense solidified Anand's status as the unified 15th World Champion, following a direct line from Fischer to Karpov to Kasparov to Kramnik and finally to Anand.

The final game seemed typical of the entire match. Playing white, Topalov achieved a pleasant middlegame out of the Queen's Gambit Declined opening. Knowing Anand's reputation in rapid and blitz games, Topalov couldn't afford to play a tiebreaker and had to find a way to win today, even risking defeat. Anand, defending patiently, saw his opportunity on move 30 and struck with a dangerous pawn sacrifice f7-f5! After 33... Rd4 and 34... Qe8, white's monarch was in grave danger, a complete reversal of how this match began in game 1. While Topalov escaped the mating web today, the attack cost him the queen. Game! Set! Match!

Final Standings: Anand 6.5 - Topalov 5.5
What is next? According to the World Chess Federation FIDE, eight players will complete a series of knockout matches for the right to challenge Anand in a title match. The players are Topalov, Carlsen, Kramnik, Kamsky, Aronian, Gelfand and two more. These candidates matches are currently penciled in for December 2010 in Azerbaijan, while the next World Championship could be held as soon as the end of 2011. Unfortunately, FIDE has a reputation of not following through on its official commitments, so we will need to wait and see what actually transpires.
Posted by Michael Aigner at 10:10 AM No comments:

The family of Utah chess prodigy Kayden Troff hires a chocolate shop to make a giant chessboard with 3-foot pieces. The store owners use more than 1,100 pounds of chocolate while attempting their biggest project ever. After days of hard work, they deliver the board with 32 solid chocolate pieces at a chess camp run by 11 year old master Kayden, his family and their friends.

Little Chocolatiers is an American reality television series on TLC that airs Tuesday evenings. The show is based on Steve Hatch and his wife Katie Masterson's chocolate shop in Salt Lake City and how they make their chocolate. 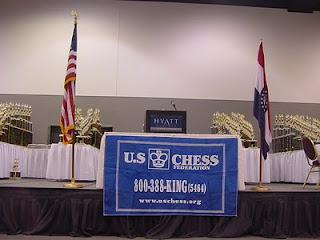 A whopping 55 local youngsters, their parents and coaches flew to Atlanta for the Bert Lerner National Elementary Championship this weekend. The local delegation includes most of the Bay Area's elite elementary age players plus large teams from the two strong Fremont schools. I hope these kids can bring home a few national titles plus an assortment of trophies from many different sections! Go Bay Area!

K-6
K-5
K-3
K-1
Team Standings
If anyone who was in Atlanta took photos at the awards ceremony, pretty please with a cherry on top send me some pictures for my blog.

Posted by Michael Aigner at 10:07 PM No comments: 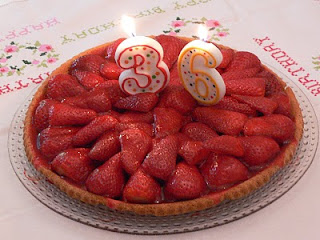 Finally, I hope to play in the Powell G/45 tournament tomorrow at the Mechanics' Institute. I expect to see many of my students. Will preteen terror NM Yian Liou win for the second month in a row? Can any of my lower rated kids scalp an expert or a master? And will I perform well enough to eek my USCF rating back above my lifetime floor of 2200. Wish us all good luck!
Posted by Michael Aigner at 8:49 PM No comments:

This morning, the challenger Veselin Topalov of Bulgaria leveled the score of the World Championship match at 4 games each. He continued a theoretical discussion in the Slav defense, this time obtaining an advantage in an opposite colored bishops endgame. However, the defending champion Viswanathan Anand of India defended resourcefully and would have drawn if he had not blundered with 54... Bc6?? Better was Ba4, allowing the Bishop to defend h7 if needed. Black resigned two moves later because he couldn't stop White's Pawns and active King, e.g. 56... Be8 57. g5 Bc6 58. f4 Be8 59. Bg7 Bc6 60. g6 hxg6 61. Kxg6 Bd7 62. Kf6 Kh7 63. Ke7 Ba4 64. d7 Bxd7 65. Kxd7 Kxg7 66. Kxe6.

Only four games remain in the match! Watch the action LIVE on ICC on Thursday, Friday, Sunday and Tuesday beginning at 5:00 in the morning PDT. Anand plays White on Thursday and Sunday.

Current Standings: Anand 5.5 - Topalov 5.5
If the match somehow ends knotted at 6-6, rapid and blitz tiebreaks will be played on Thursday, May 13. Tiebreak format: Four action games G/25+10 sec/move. If still tied, up to five pairs of blitz games G/5+3 sec/move (as many as 10 games total). If still tied after 12 classical games and 14 rapid/blitz games, they play a single Armageddon game where White has 5 minutes against 4 (no increment) but Black gets draw odds.
Posted by Michael Aigner at 11:50 AM 1 comment: