The explosion of scholastic chess in the Bay Area has resulted in the proliferation of a mutant subspecies of chess master.  Most of these mental wizards mastered the relevant skills in their early teens, and a few even younger than that!  Overfeeding of adult masters forced the mutants to compete against each other, and they studied diligently merely to keep up with peers.


All told, there are 2 International Masters, 4 FIDE Masters, 16 rated above 2200 on January rating list.  And here's a special round of applause for the newest masters, those who broke 2200 since this post dated September 19: Teemu, Jerome, Pranav, Hans, Andrew, Ladia and Art!  (Corrected 1/20)

Who's next?
Posted by Michael Aigner at 6:06 PM No comments:


This hilarious chess video comes from the US Chess School in December 2010.  The precocious lad was, at that time, the youngest chess master in the country at 10 years old.  He destroys overconfident teacher IM Greg Shahade in both the blitz game and the kibitzing, all the while sipping 7-Up.  The video resurfaced in the summer of 2013 on the Top 50 rankings at Reddit.com.  Today, four years after upload, it surpassed one million views on YouTube!

Whether you have seen it before or not, this video is definitely worth another look.

Starting tomorrow, Sam Sevian, now a full-fledged Grandmaster, participates in the prestigious Tata Steel Tournament at Wijk aan Zee (Netherlands).  Many can remember him from Bay Area events as an 8 or 9 year old, already a dangerous opponent.  He certainly has come a long way, and his future appears very bright!
Posted by Michael Aigner at 11:53 AM No comments:

Wishing Everyone Many Brilliant Moves for 2015!

The first Bay Area chess event of 2015 is in the books.  The New Year Championship drew 180 players to the San Francisco Airport Hyatt for $13,000 in prizes.  Elite Chinese Grandmaster Xiangzhi Bu dominated the strong Open section, finishing a full point ahead of the other two GMs.  Yours truly finished with a respectable but unsatisfying performance.  Click here for USCF rated results.

The largest local adult tournament of the year is just 10 days away!  The Golden State Open, which attracted almost 300 participants a year ago, guarantees a $25,000 prize fund.  Note that this event moved 25 miles south from Concord to the Dublin-Pleasanton Holiday Inn, near BART.  Register soon and view the advance entries at ChessAction.com.

If you enjoy following top level international chess festivals, then you're in luck!  The Tata Steel Tournament at Wijk aan Zee (Netherlands) begins this weekend.  The Masters section features World Champion Magnus Carlsen of Norway plus four more of the Top 10: Italian-American Fabiano Caruana, defending champion Levon Aronian of Armenia, Dutch-Russian Anish Giri, and the young American immigrant (from the Philippines) Wesley So.  The Challengers include the Czech David Navara, the young Chinese star Wei Yi, and a pair of American Grandmasters with strong ties to the Bay Area: Orinda native Sam Shankland and the now 14-year old prodigy Sam Sevian.  Each section is a 14-player round-robin, meaning 13 rounds, beginning on Saturday at 4:30am PST.  Make sure to check out the live internet coverage when you wake up (especially Twitter and Instagram).


Happy New Year to All!
Posted by Michael Aigner at 4:05 PM 1 comment: 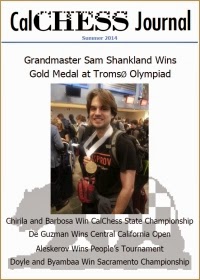 In the latest issue of CalChess Journal, President Tom Langland addresses the cultural phenomenon of helicopter parents at chess tournaments.  Indeed, any experienced coach or director can share their unique laundry list of nightmares involving overly affectionate parents.  Oxford Dictionaries define a helicopter parent as one "who takes an overprotective or excessive interest in the life of their child."  These parents frustrate coaches, drive directors nuts, and do no favor to the kids they adore!

For more news and information about chess in Northern California, please visit the CalChess website.  Membership is $5/year.  Join here.


"I see it all time, especially in chess tournaments. Parents who have extreme anxiety about separating from their child before their game starts are the chess equivalent of what is known as helicopter parents. Before a round starts, their child has to have all their pencils sharpened for them, tissues ready, their notation sheet filled out, drink bottle filled, snacks close at hand and that last minute hug (or two or three) before the round starts. Unfortunately, this causes trouble for the tournament directors who want to start the round on time. The TDs are stuck between upsetting parents who want to continue to cosset their child, and those parents, players and coaches who expect the tournament rounds to begin on time.

"I really do appreciate the problem a parent has with separating from their child and wanting to be comparable to a helicopter watching over them. Many times, I have been criticized that I don't know what it is like! Anyone who knows me understands I really do. In fact, that's how I ended up being most prolific National Tournament Director and International Arbiter in the US. When my sons started playing in like the second grade I remember being exactly like a helicopter. I would watch every move from afar, cringing every time they would hang their queen or miss a checkmate in one move. Finally at the State Grade Level Championship, I was driving my wife crazy and she suggested I volunteer to help direct to keep my mind busy. That's what got me here, and yes, I know exactly just how it feels to be a helicopter parent! It's tough!

"I've even seen helicopter parents vie against each other, like it’s a competition for who is the better parent. Two moms of opposing players aspire to be the last to leave their child. Which will get the final hug and a kiss in? All the while you can see the child hoping their parent would stop the fuss, go away and let them begin their game. Then we have the parents who have to peek in whenever the opportunity arises, holding the door open indefinitely to get that last glance in, hoping to get a glimpse of their child's position. I wish parents could see how distracting this is to all the participants. Every child has to look up to see if it is their parent peering at them, instead focusing on their game. I've even had a parent somehow observe their child forgetting to press their clock and insisted that I go over and remind the player to press their clock!

"Parents, the tournament staff do understand your desire to fuss over your child and to make them happy at the tournament. But please, remember the staff also wants to make the tournament a complete success and that includes starting the rounds on time and keeping distractions out of the room. Please be mindful of their requests and assist their efforts. Thank you!"

Thank YOU Tom! I could not have said it any better.
Posted by Michael Aigner at 10:51 PM No comments: