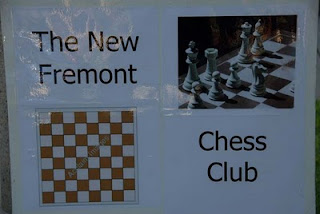 The New Fremont Chess Club promotes chess for both adults and advanced juniors with a wide variety of activities. In addition to rated games on Friday nights from 8-11pm, the club hosts weekend tournaments plus camps and lectures by Grandmasters or International Masters. Celebrities who taught in Fremont include 2008 US Champion GM Yury Shulman and the reputed trainer GM Gregory Kaidanov. Check out a recent interview with Shulman by high school student Aditya Kumar.

The Fremont Open will take place next weekend, July 31 to August 1. The organizers hope to match the turnout from the past two years (average of 70). The early entries appear to be a bit sluggish, but the event seems like a good practice opportunity, especially for 1600 to 1900 rated players.

Cadet Kicks Off Today in Tennessee 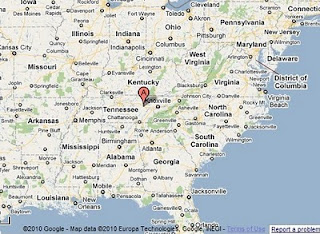 (The town of Crossville, TN is home of the US Chess Federation national office and the venue for the US Cadet.)

The US Junior is not the only national scholastic invitational going on this week. Eight of the nation's top talents under age 16 flew to Crossville, Tennessee for the US Cadet. While the big guns (notably GM Ray Robson and FM Darwin Yang) elected to play in St. Louis, the field remains quite impressive. Undoubtedly this is the first time that all eight players are masters!

Another noteworthy observation about the Cadet is how tight the ratings are: just 100 points USCF from top to bottom! Seemingly anyone could beat anyone else in this tournament; it wouldn't surprise me to see each player nicked for at least one loss during the seven rounds. That should make it interesting! If I had to pick one favorite, I would go with the top seed Aleksandr Ostrovskiy because he lives in New York and consequently has more 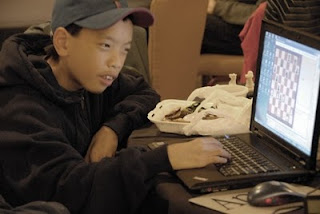 experience facing masters than anyone else.

Of course, I will cheer loudly for my pupil Yian Liou (photo at right) to bring home a national title. Yian has steadily improved from 1200 back in 2005 to nearly 2300 today. He earned a 2400 performance last weekend at Pacific Southwest Open in Los Angeles, drawing with GM Melik Khachiyan and beating IM Jack Peters. Go for the gold Yian!

2010 US Cadet Invitational (most updated USCF rating, July FIDE rating)
Games will be broadcast live on the MonRoi website (free registration). I don't know when the first round begins, except that it is sometime today. Stay tuned for updates. Correction: Round 1 is on Tuesday, July 13.
Posted by Michael Aigner at 6:51 AM No comments:

Good Luck to Steven and Sam at US Junior! 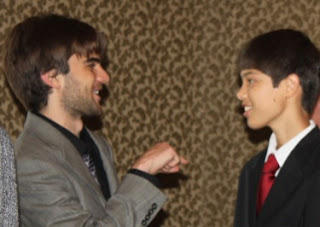 (The top two seeds--Sam Shankland at left and Ray Robson on right--share a lighter moment before the action begins. Photo from CCSCSL website.)

The field seems a bit disappointing, with only three of the top nine players under 20 on the April Top 100 list actually showing up. This year's favorite is top seed and defending champion GM Ray Robson. The second seed, and only International Master to participate, is our own Sam Shankland, who could benefit from a little more luck than at recent tournaments. To be quite honest, I will be shocked if neither Ray nor Sam finish at least tied for first.

The dark horse is FM Conrad Holt, the highest rated player from Kansas ever. He gained another 50 rating points and earned a pair of IM norms at the Copper State International and World Open. Third seed FM John Bryant of Los Angeles won't be intimidated by anyone and may also end up being a force to reckon with.

In addition to Sam, I will cheer loudly for my student Steven Zierk. This is Steven's first one-game-per-day invitational and he will need to adjust to the level of competition. He has enough experience drawing against Grandmasters (plus one notable win) that he could be a serious contender. The challenge will be to play consistently in a round-robin tournament where eight of his nine competitors are rated within 30 rating points or higher.

2010 US Junior Closed (most updated USCF rating, July FIDE rating)
Watch for live video coverage from St. Louis beginning at noon Pacific time daily through July 19 (rest day 7/16). As a treat, GM Hikaru Nakamura is scheduled to comment on the first two rounds this weekend. Games are being broadcast LIVE on ICC (check under the Events list). Watch for occasional updates on this blog and on my Twitter page.

Good luck Steven and Sam!
Posted by Michael Aigner at 9:42 PM No comments: 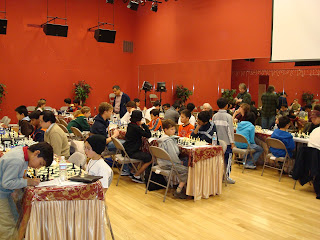 (The playing hall is actually a dance studio. Watch out for the mirrors!)

First of all, I apologize to my regular readers for this extended absence. I am battling an annoying intestinal ailment that has deprived me of much of my usual zest for over two months. Unfortunately, it is still not cured, although the doctors can't seem to find anything wrong in my medical test results.

The 8th Silicon Valley Challenge hosted by the Sun Chess Club will be this coming Sunday! As in recent years, the event will be held at Susan's Dance Studio in NE San J 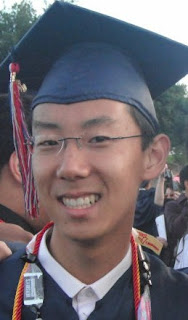 This year takes on a little more significance since Charles graduated from Saratoga High School and will begin classes at UC Berkeley next month. I began teaching him in 2004 and had the pleasure of watching him grow into a smart and confident young man. Charles was never one of my star students, but his success at big money tournaments (Las Vegas!) remains unparalleled by my students. I still remember watching him improve from 1394 to 1806 in the summer of 2005. He attributed that quantum leap to learning to pay attention to tempo in chess.

In high school, Charles took over the leadership of the Saratoga High School club, extending the streak of state titles to a record six straight years. He also began organizing a couple of rated tournaments each year. Read about last year at this blog post. Over four years, a total of 350 players participated in 11 events, with an impressive peak of 62. Charles generously treats his players to free snacks and drinks, which may help explain why many come back each year.

I highly encourage my students to come to play. Unfortunately, it looks like my ongoing health problems may prevent me from coming down on Sunday. Big sigh!
Posted by Michael Aigner at 8:45 PM 1 comment: