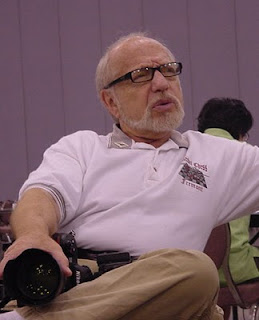 I suggested in this blog post from last December that someone should write a book about the many hats a chess parent must wear at a tournament. Merely surviving a weekend of scholastic chess could be a science in itself, combining mathematical reasoning with psychology, navigation, nutrition, endless patience and endurance. If it seems bewildering to a tournament veteran, I hardly can imagine what parents who never played chess must go through!

If you do have a budding chess player you might want to purchase Survival Guide for Chess Parents. I just checked and Wholesale Chess has it for $17.05. I guess you might call this book "Everything You Wanted to Know About Being a Chess Parent and Were Afraid to Ask!"

The fight for this year's came down to the final tournament in Reno, the Western States Open, with FM Daniel Naroditsky ahead by 45 points. Steven literally needed to pull off a 2700 level performance, which is exactly what he did by beating one Grandmaster and drawing with two others. I predict these two teenagers, both now rated above 2420 and ranked in the top 15 of the country under age 21, will compete neck and neck again in 2010.

Here's a summary of Steven Zierk's many chess achievements. (Photo at top by Shorman.)

Posted by Michael Aigner at 5:45 PM No comments: 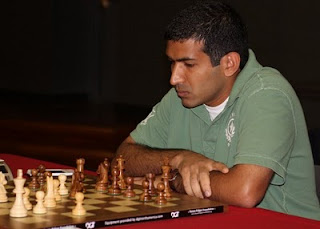 Surprise, there's a new name leading the Northern California rating list! For several years, the local 500-lb panda was GM Josh Friedel, top board for the San Francisco Mechanics and resident of the infamous GM House in El Cerrito. However, Josh was recently passed by GM Vinay Bhat, the popular San Jose native who rose through the ranks in the mid 1990s while playing nearly every weekend all around the Bay Area.

For all his life, Vinay (photo at right from SPICE 2009, photo below unknown) chased records set by others, such as when he became the younges

t USCF master at 10 years, 6 months (broken twice since). He finally reached the top of the hill here in California, ironically while traveling over the hills of Europe, competing in strong chess festivals against dozens of Grandmasters. Despite not playing in America, Vinay's USCF rating jumped upwards in large part thanks to a controversial new regulation that converts overseas events into USCF rating points.

There are three newcomers to this edition of the Top 20 list. FM Andrey Chumachenko returned to the Sacramento Chess Club after spending about five years in North Carolina. SM Gregory Kotlyar and FM Robin Cunningham participated in the CalChess State Championship on Thanksgiving weekend after taking many years off.

Posted by Michael Aigner at 12:55 AM No comments: 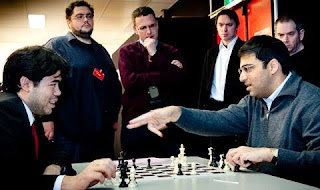 (Nakamura and Anand analyze after the game. Photo from Chessbase website.)

The brash American kid faces the polished World Champion. Such was the contrast earlier this week when US Champion Hikaru Nakamura squared off against World Champion Viswanathan Anand at the famous Corus tournament in Wijk aan Zee, Holland. The stage was set for the veteran to teach his young challenger a painful lesson.

Alas, that was not to be! Nakamura, playing with the black pieces, surprised his opponent on move 1 with the Dutch Defense 1.d4 f5, playing the Leningrad variation. Theory said that such a bold opening was suspicious at the highest levels, except in rapid or blitz games. The Dutch is a rare bird at the Grandmaster level. However, I beg to differ with the theoretical assessment after about ten years of experience. Apparently, so does Nakamura. In fact, he has already essayed the Dutch quite a few times in American weekend tournaments, but facing Anand is certainly a step upwards!

How did he do? Play through the game below to find out! Black chose a setup of d5, Nc6 and Ne4 to combat White's double fianchetto. The computers gave White a modest advantage around move 15, but by move 19 the pressure had dissipated. Definitely a 33 move draw with Black against a player of Anand's caliber counts as a success.

Nakamura will face more challenges at the Corus tournament. He plays against top rated Magnus Carlsen on Thursday, early leader Alexei Shirov on Saturday and former World Champion Vladimir Kramnik on Sunday. Watch the games live on ICC ChessFM beginning at 4:30am PST; if you wake up at 7:00am, you'll still get to see the climax of the round. 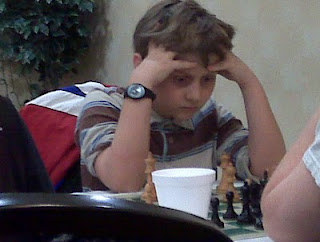 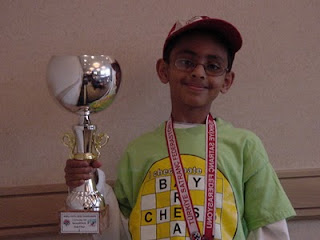 (FM Tanuj on left and candidate master Sam on the right.)

If the Top 20 for Age 12-17 looked scary, then wait until you see the little kids! Three of the Top 20 for Age U-12 are rated over 1900 while another 11 are rated above 1600. Wow!!! Top rated Sam Sevian has a strong chance to become America's Youngest Master ever while FM Tanuj Vasudeva earned the silver medal at World Youth U-8 in Turkey last October. Don't forget to watch out for this quartet of rapidly improving juniors: Jack Zhu, Hunter Klotz-Burwell, Russell Bik and Udit Iyengar.

Posted by Michael Aigner at 3:37 PM No comments: 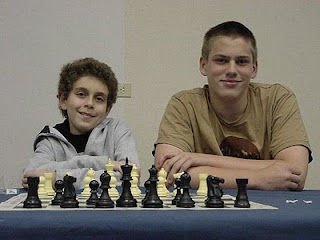 (Photo of FMs Danya and Steven from the 2008 CalChess Scholastics, where they shared top honors in the High School championship.)

The CalChess scholastic rankings keep becoming stronger and stronger. Ten players on the Top 20 for Age 12-17 are rated over 2000 and the next ten are over 1900; just 3-4 years ago, the 20th spot was well into the low 1800s. Incredibly, five ranked players are just 12 years old, with plenty of room to grow over the coming years.

Even with the graduation of IM Sam Shankland last June, there are still five active young Masters in the Bay Area. Two recently broke 2400 USCF, earning the distinction of 'Senior Master' in addition to the FIDE Master title. Congratulations Danya and Steven! And Evan Sandberg is racing to break 2200, having gained an impressive 77 points in two months.

Posted by Michael Aigner at 5:55 PM No comments: 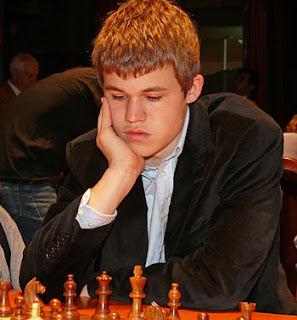 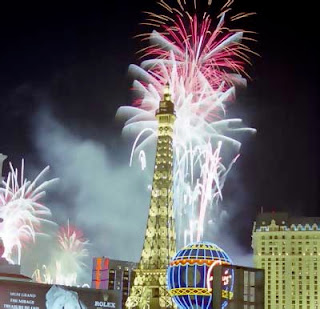 Here's wishing all of my readers a joyous, healthy and prosperous New Year 2010!!

There has been plenty of exciting chess news to report over the past couple of days. Several local youngsters faced stiff competition at the North American Open in Las Vegas (photo top right), and they no doubt earned the praise of many around the country. Watch for my final report in the coming days.

The biggest international story is the rise of a Norwegian teenager as the new #1 rated player in the World. At 2810, Magnus Carlsen (photo top left) becomes the youngest top ranked chess player in history! It may only be a matter of time before he also earns a shot at the official World Chess Championship. Check out the December 25 issue of Time magazine for an interview with the new "King of Chess".

Posted by Michael Aigner at 12:28 AM No comments: