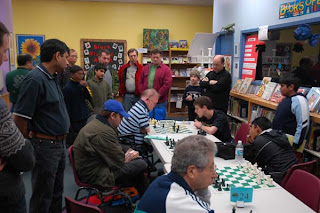 (Photo of time scramble at the end of round 1 game Alan Naroditsky vs Michael Aigner. Thanks to Mark Shelton of ChessDryad.)

The annual People’s Chess Tournament in February is one of the oldest traditions of Northern California chess. Its history dates back to the topsy-turvy era of free speech and free love in Berkeley around the early 1970s. Normally the tournament takes place in magnificent Pauley Ballroom looking out at Sproul Plaza and the Campanile (Sather Tower) on the campus of UC Berkeley. The spirit of the counterculture remains alive today, symbolized by the incessant noise generated by the bongo drummers that spend each afternoon in the plaza.

Unfortunately, a scheduling snafu robbed us chess players of this tradition in 2008, for the second time in three years. When it appeared there would be no People’s Tournament at all, South Bay organizer Salman Azhar stepped up to the plate despite only three week’s notice. The People’s Replacement Tournament was definitely not the Real Thing, but it would have to suffice. The event was moved 50 miles south to the library of Granada School in Santa Clara. Only four rounds were played over two days, instead of the usual three-day schedule. And at least one veteran player complained about the lack of drums. On the bright side, the new venue allowed easy freeway access and plenty of free parking.

About 80 players showed up for the 1200+ sections while another 40 kids played in the one-day side event restricted to players rated under 1200. These attendance figures allowed Dr. Azhar to increase the advertised prize fund slightly to $2500, a respectable 71% of last year’s payout in Berkeley despite having 45 fewer players. Players competed in four sections: Master/Expert, Class A, Class B and Class C/D. In an era of G/30, G/45 and G/60 tournaments, the People’s time control was slow enough for classical chess: 30/90, G/60. In fact, some parents remarked how pleased they were to see their kids actually take their time to think while playing chess!

The top section featured local IM Ricardo DeGuzman as the top seed, followed by two FMs and two NMs. Upsets began rolling in as early as the first round: fifth grader Yian Liou (1900) crushed FM Eric Schiller’s anti-Dutch system within 20 moves but high school student NM Sam Shankland could only draw against extensive opening preparation by adult expert Brendan Purcell (2023). In the third round, reigning world U12 champion FM Danya Naroditsky calmly held DeGuzman to a draw. These results left this reporter as the only player with a perfect 3-0 score going into the final round, with DeGuzman, Shankland and Naroditsky tied for second at 2.5 each.

That set up my critical round 4 pairing with IM DeGuzman. We played many times before, with DeGuzman scoring a lopsided 23.5/27 = 87%. I had never won, achieving just seven draws despite several completely winning positions. Our typical game saw DeGuzman overcoming an opening disadvantage through his creative and aggressive middle and endgame play.

To replay this game, click on the link to Chess Publisher.

The game in Santa Clara was no different; I achieved a huge opening advantage from the white side of the Maroczy bind. The veteran IM meekly lost a pawn with 19… Qa5 allowing the thematic tactic 20.Nd5, but the game had just begun. Surely a clear pawn up should be enough to win. However, after two inaccuracies (I should have played 32.Bh3 instead of Re2 and 34.Ba5 instead of Ba7), history was well on its way to repeat. Was this the DeGuzman Curse?

Fortunately, history would not repeat itself. Known for impeccable play in the late middlegame and endgames, the sly magician blundered with the greedy 39… Bxa2 when the pawn push a3 would have sufficed for an advantage. The brilliant retreat 40.Be2 threatens three black targets on the a5-e8 diagonal and, from this point forth, black was in trouble. The bishop of same color endgame up a pawn that resulted from further trades on moves 44 and 45 was merely a matter of technique despite white’s doubled pawns. After nearly seven years since our first meeting, the monkey is off my back!

Approximately a quarter of the players in the tournament won a part of the prize fund. Much has been said about the rise of scholastic chess in our area, with many adults dropping out simply because they no longer can keep up with the tactical skill of underrated kids. In fact, the three players who tied for second place in the Master/Expert section were age 12, 14 and 16. But there is still a glimmer of hope for the older generation: the Class A and Class C winners were all adults! Hopefully this success by George Mandrusov, Harold Parker and Kenneth Voss can inspire players at their age not to quit but rather to keep fighting on.

This was a really fun tournament to go to!