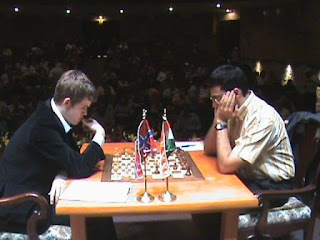 (Magnus Carlsen as white versus Viswanathan Anand at the beginning of round 3 in Morelia. Anand won the game. Photo from official website.)
Seasoned chess enthusiasts look forward every year to the tradition known as the Linares super-tournament. Eight of the top players in the world test their opening preparation, mental capacity and nerves in a double round-robin format. The participants for 2008 are all ranked in the top 13 of the world: Viswanathan Anand (2799), Veselin Topalov (2780), Alexei Shirov (2755), Peter Leko (2753), Vassily Ivanchuk (2751), Levon Aronian (2739), Teimour Radjabov (2735) and Magnus Carlsen (2733). Considering the high level of competition, many chess experts call this event the "Wimbledon of chess."
For the second year in a row, the Linares tournament has been split between two continents, with half of the rounds played in Morelia, Mexico and the other half in Linares, Spain. During the first seven rounds in Morelia, the participants faced each other player one time and then they repeat the process in Linares--of course, with opposite colors. The Morelia half just ended on Saturday and now the players have until Thursday to fly to Spain and adjust to the European time zone and climate.
Standings after 7 of 14 rounds

The story of the tournament has been the high percentage of fighting chess games. In many top level chess competitions, the number of draws varies between 2/3 or even 3/4 of the games. Not so in Morelia! A stunning 15 of 28 games so far have been decisive, and even many of the draws were filled with plenty of drama. Every player has both won a game and lost a game! Nearly 40% of the games featured the Sicilian defense, one of the most aggressive openings known. Simply said, the tournament has been a spectator's delight.

The best player, without a doubt, has been Anand. He leads at "+2" or 4.5 out of 7. He overcame a loss to Aronian with victories against Shirov, Leko and Carlsen. Two other players who can be happy with their result to date are the veteran Shirov and the youngster Carlsen. The one who is probably the most disappointed is Leko. It has to be an omen when the well-known drawmaster Leko has less peaceful results than Mr. "Fire On Board" Shirov himself!

Here are my favorite five games, with links to the Chess Publisher game viewer. I highly recommend checking out these games to all serious students of the royal game, especially to my own students rated over 1800 USCF (hint, hint). You can also find all of the games in "liblist Linares08" online at ICC.

Stay tuned beginning on Thursday to see who will prevail in the second half of the tournament. Will World Champion Anand defend his #1 FIDE rating or can someone else finish in first place? Check out the official website or visit ChessBase website for news and detailed Grandmaster analysis. The Internet Chess Club also has daily coverage on ChessFM; type "finger Linares08" for more information when you're logged in.