Kramnik Draws with the Nimzo Indian 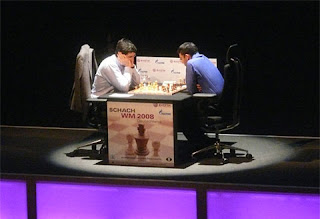 (Photo of the stage during game 1 from the Chessbase website.)

Game 2 of the World Chess Championship took the same number of moves (32) as game 1, but most observers would agree that the action was more exciting. Defending champion Vishy Anand surprised many by playing 1.d4 in his first game with the white pieces, as he is known primarily as a king pawn player. In response, the challenger Vladimir Kramnik tried the Nimzo Indian defense (1.d4 Nf6 2.c4 e6 3.Nc3 Bb4). After 4.f3 and 6... c5, both Grandmasters looked for a sharp fighting contest. Kramnik would later sacrifice his h-pawn for pressure against Anand's monarch. Unfortunately, the combatants prematurely agreed to a draw when black threatened to win back the c-pawn. Read Chessbase news for commentary by super-GM Levon Aronian and light analysis of game 2 by IM Malcolm Pein

The third game is on Friday beginning at 6am PDT. So far, the organizers have imposed a 30 minute internet delay on broadcasting the moves of the match, but I hope that they will see the light and open up live coverage of the games on ICC and other online servers. Regardless of the delay, ICC has exciting daily audio analysis by invited Grandmasters on its ChessFM program (Jan Gustafsson on Friday and Nick deFirmian on Saturday).

I will update the sidebar of this blog for each game. If you have not already, please vote in the poll by Friday morning: Who will win the World Chess Championship?
Posted by Michael Aigner at 11:39 AM