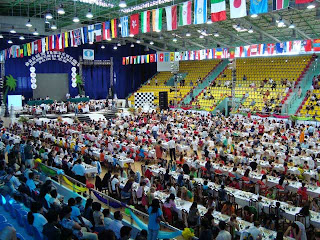 As the World Youth Chess Championship in Vietnam enters its second week, the tension on the top boards mounts. Everyone hopes to finish well in the 11 round event, either earning a medal for the top 3 places, or at least to score within the top 10. Considering the level of competition, any top 10 result is highly impressive.

After scoring a combined 3.5/4 over the past two days, FIDE masters Sam Shankland and Danya Naroditsky both have a shot at a respectable finish. Depending on his pairings, Sam even has a chance at bringing home his second IM norm (but he needs to play one more GM or IM). Danya has recovered from a rocky beginning to pull up to 5.5/8, just half a point out of a tie for fourth place. Either could medal with three straight wins to close out the week, although that may be unrealistic given the strength of opposition.

Update on Tuesday morning: Sam has 6.0/9 for a 2474 performance rating. Normally this would be enough for a norm, but he faced only 1 GM and 1 IM. As luck would have it, he is paired with an IM in round 10 and needs a draw for what appears to be a norm!

I update the daily results below. Check out the games from rounds 1-7 at ChessAsia.net. 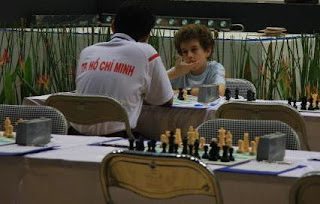 Round 8:
Round 9:
Standings after round 9:The USA delegation consists of 28 players, parents and a half dozen coaches. Coverage on US Chess Online has been uncharacteristically disappointing due to a complete lack of first-hand news from Vietnam. Don't they pay enough for one of the coaches to spend 30 minutes to write up a daily blog story?

The following list includes 13 Americans with a score of 5.0 or more after round 8. Kudos to FM Darwin Yang of Texas, who leads the U12. Can Darwin repeat Danya's success from last year?

Posted by Michael Aigner at 9:51 AM