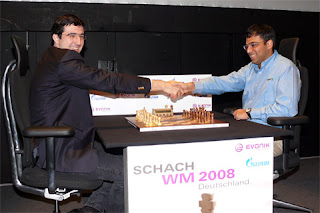 (Kramnik on the left and Anand were all smiles at the walk-through on Sunday, prior to the start of the much anticipated match. They even played a pseudo game: 1.g4 b5 1/2.)

The official World Chess Championship between reigning champion Viswanathan Anand and challenger Vladimir Kramnik began this morning in Bonn, Germany. The first game saw Kramnik essay the solid Exchange Slav as white and, not surprisingly, a draw was agreed in an opposite bishop endgame on move 32. Boring! The Grandmasters will meet another 11 times between now and November 2, with one game daily except for rest days on every third day. Each game begins at 3pm CET = 6am PDT and can take upwards of six hours. In case of a 6:6 tie, the combatants will square off in tiebreaks: first four rapid games of 25+10, then two blitz games of 5+10 and, if necessary as a last resort, an Armageddon game. Unlike previous championships, there are merely 12 games (not 24) and the defending champion does not hold draw odds in case of a 6:6 tie.

Both Anand and Kramnik are well-qualified for this title fight. They have occupied two of the top three spots in the world rankings since the mid 1990s. Anand won the 2007 World Chess Championship held in Mexico City with an undefeated performance in an 8 player double round-robin. Many of the world's top players participated in this amazing tournament, but not Veselin Topalov, Vassily Ivanchuk and the young rising star Magnus Carlsen. Before Mexico City, Kramnik had reigned as the champion for seven years. He defeated the legendary Garry Kasparov in 2000 and then defended his title in matches against Peter Leko (2004) and Topalov (2006). While nobody questions Anand's skill, he lacks the strong credentials of Kramnik in the intense arena of match play. Will this give the challenger an edge?

Here is the tale of the tape, so to speak: 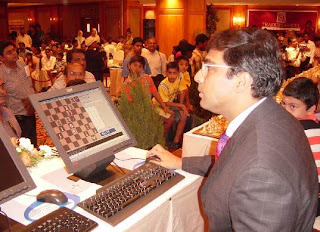 I plan to provide coverage of most of the games in this match on my blog. I will include any exciting stories that I pick up around the internet. Hopefully the chess community can avoid another major scandal like ToiletGate between Kramnik and Topalov in 2006. Please let there be many exciting sacrifices and important opening novelties for all the chess fans around the world to enjoy!

You may follow this match on the internet. Almost every serious chess website seems to have some coverage.