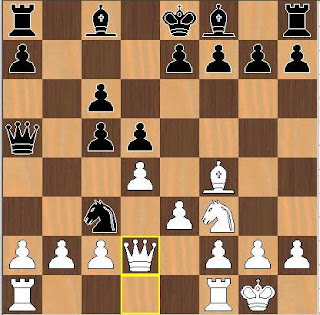 itoff (on left in NASA photo, posing with fellow American Richard Garriott) and us Earthlings has become tactical by move 9. After Earth voted for Qa5+ on move 5, White's resources along the a5-e1 diagonal were limited. Humanity has seized the initiative. On the bright side, the resident of the International Space Station still has a development advantage and even managed castled. Is that enough?

If you read this post by Sunday at noon Pacific time, please surf to the USCF website to vote on move 9. You do not have to be a member to participate. The champions from Stevenson Elementary School in Bellevue, Washington selected four candidate moves: Ne2+, cxd4, Bg4 and Ba6. I won't reveal which one I chose; instead, I urge the reader to calculate the tactical possibilities after each option.