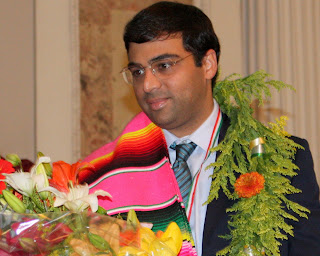 Just a few minutes ago, Viswanathan Anand of India clinched the World Chess Championship by drawing Game 11 against Russian challenger Vladimir Kramnik. He won the match held in Bonn, Germany by a 6.5-4.5 margin to retain the title. Click to replay Games 1-10. Anand also gained 8 rating points from this match to tie Veselin Topalov on top of world rating list.

Tonight, I will report from the Mechanics' Institute in The City on the final week action of the US Chess League. Watch this blog for photos! Can the San Francisco Mechanics close out the 2008 regular season on top of the Western Division? All that SF needs is a 2:2 tie tonight against the 2nd place team, the Miami Sharks. The lineup for the good guys: GM Vinay Bhat, IM David Pruess, IM Dmitry Zilberstein and NM Gregory Young! Watch on ICC starting at 5:30pm!

Perhaps the biggest and most surprising news comes from the World Youth Chess Championship in Vung Tau, Vietnam. Local FM Sam Shankland (see photo at right) has unofficially earned his second IM norm by winning today's game against IM P. Karthikeyan (2426) of India. There's more! He will play the white pieces in the final round against #2 seed GM Quang Liem Le (2583) of Vietnam. If Sam (7.0/10) somehow wins, he guarantees at least the BRONZE MEDAL on tiebreaks and, depending on two other results, he could tie for 1st in the World U18! A tie for 1st would include another carrot: an automatic GM norm. Alisha Chawla (4.0/10) also won this morning while FM Danya Naroditsky (6.5/10) drew again.

Wow! I am out of breath! Time to pack for my trip to San Francisco.
Posted by Michael Aigner at 10:17 AM