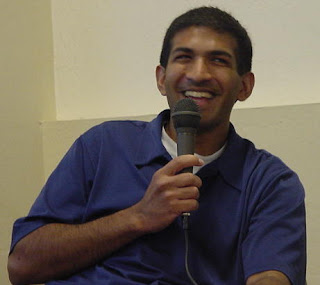 May I introduce you to Grandmaster Vinay Bhat? After several months of anticipation, the world chess federation FIDE today formally awarded him its highest title. Just 24 years old, Vinay had already earned the required three norms and he improved his rating to 2500 with several successful tournaments in Europe over the summer. As a Grandmaster, he joins 1162 colleagues around the world, including 61 who play under the USA flag.

Vinay grew up in San Jose, cutting his teeth each Thursday night at the Kolty Chess Club in Campbell. His rating rose quickly, already around 1500 by the end of second grade. At the tender age of 10 1/2 years in 1994, Vinay broke the USCF record for youngest master, beating a mark once set by Bobby Fischer decades earlier (and since broken by both Hikaru Nakamura and Nicholas Nip). His rating continued to rise and, at 16, he became an International Master. Vinay took some time off from chess to focus on graduating from Lynbrook High School and the University of California at Berkeley. However, the few occasions that he did play saw him continue to impress, earning GM norms in China (2002) and Spain (2006, 2007). In April 2008, Vinay was awarded the prestigious Samford Fellowship to continue his studies in chess.

Congratulations Vinay on a recognition that is long overdue! To read about Vinay's recent chess adventures and get a feel for his great personality, check out his insightful blog, complete with commentary about games from tournaments in Europe and America.

Update on Wednesday night: What did America's newest Grandmaster do to celebrate? He beat the country's #2 rated player, GM Hikaru Nakamura (2751), in US Chess League action for the second year in a row. Click here to replay this year's game.
Posted by Michael Aigner at 10:45 AM