What Is Wrong with Kramnik? 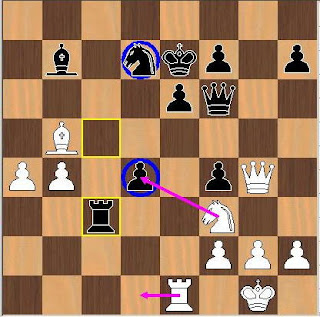 (Can white take the d4 pawn, intending to skewer the black queen and the knight on d7?)

The World Chess Championship in Bonn, Germany has taken an unexpected turn. Please stand up if you predicted that Vishy Anand would lead by three games at the midway point of his 12 game match against Vladimir Kramnik. The relevant question today is not "Will Anand win?" but rather "What is wrong with Kramnik?" For all practical purposes, the final games of the match merely serve as Anand's coronation as the 15th undisputed World Chess Champion.

The match turned with a pair of victories by Anand from the black side of Meran, which is a sharp variation of the semi-Slav defense (1.d4 d5 2.c4 c6 3.Nf3 Nf6 4.Nc3 e6). The semi-Slav is Anand's favorite opening against 1.d4 and he is not afraid to mix it up. Black's king was stranded in the center in both contests, but he had counterplay on the g-file. In Game 3, Anand crashed through on the kingside and Kramnik subsequently blundered in a wild position. In Game 5, Anand again equalized and then Kramnik allowed a spectacular combination by capturing the poisoned pawn on d4 (see diagram at top of article). The game ended with 29. Nxd4?? Qxd4 30. Rd1 Nf6! 31. Rxd4 Nxg4 32. Rd7+ Kf6 33. Rxb7 Rc1+ 34. Bf1 Ne3!! 35. fxe3 fxe3 0-1 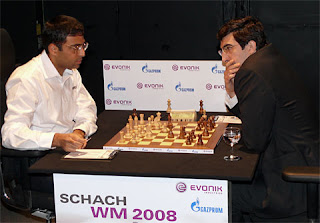 In between these two wins, Anand played the white pieces in Game 4. Perhaps content to just consolidate his lead, white achieved nothing in the Queen's Gambit Declined and a draw was agreed before move 30. By the time Game 6 began, Kramnik was two points in the hole and desperate for a win with either color. He overpressed in a position that he should have looked for ways to draw and Anand calmly scored another point. The score now stands at 4.5-1.5 in favor of the Indian superstar. After three misses, Kramnik is like the hero in Ernest Thayer's famous sonnet about America's pasttime: "mighty Casey has struck out."

The next two games are scheduled for Thursday and Friday at 6am PDT. Due to the end of summer time in Europe, the final four games on Sunday and next week begin at 7am. However, the match will immediately end when (if) one player achieves an insurmountable score of 6.5 points. Regardless of the winner, both players will split the 1.5 million Euro purse evenly. The catch is that the World Champion is guaranteed another rich purse soon while the loser fights his way through the complicated qualification cycle.
Posted by Michael Aigner at 11:50 AM