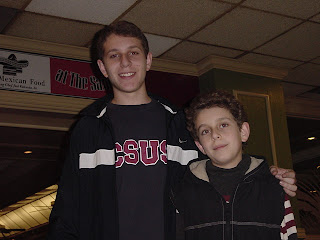 (Alan Naroditsky proudly stands together with his well-known little brother.)

Whenever he attends a chess tournament, Alan will always be known as "the other" Naroditsky. Having a younger brother who has achieved so much is hardly easy; yet, I have always admired how Alan has never let that fact limit his own, more modest, ambitions in chess. The following response in the interview further shows the respect for his "kid bro".

- Who are your role models in chess?
My role model in chess is definitely my brother. It doesn't matter that I taught him the moves a long time ago; now he's teaching me!

Judging from Alan's FIDE rating of 2133, the young coach has done a pretty decent job! Perhaps Alan would be even higher rated if he didn't commit many hours of time each week to nurturing his bigger talent: playing the piano. Go Alan! Keep up both activities!