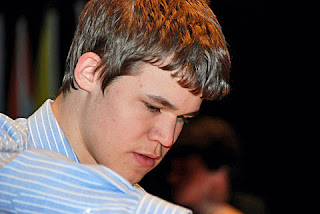 17 year old "Wunderkind" GM Magnus Carlsen of Norway stands poised to break the 2800 barrier in chess ratings. According to the LiveRating website, Magnus already passed GM Vladimir Kramnik for the unofficial #2 ranking in the world after starting out with a blazing 5.0 out of 6 in the Aerosvit Tournament in Foros, Ukraine (finger Foros08 on ICC). Top rated GM Vishy Anand remains at 2798, merely 6 points ahead of the teenager.

It is now a foregone conclusion that Magnus will be ranked #1 in the world either sooner or later this year! Even if he cools off in Ukraine, it appears to be merely a matter of time considering his meteoric rise. What's next for King Magnus? World Champion?
Posted by Michael Aigner at 11:32 PM