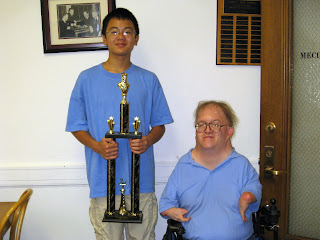 2008 US Junior Closed co-champion NM Gregory Young poses together with the fpawn. Only 13 years old, this was his second national championship behind the 2007 National Junior High School Championships in Sacramento (also a tie for first).

Can you believe that when I started teaching him, I could look him eye to eye? Three years later, both his chess rating and height have increased substantially. What's next, the FM title? I estimated Gregory's FIDE rating to be 2249 after the US Junior, meaning that he now needs only 51 more points for his international title. Good luck!
Posted by Michael Aigner at 2:14 PM