Luck and Determination to Win in Las Vegas 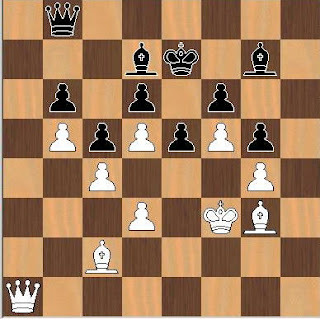 (It is White to move. Black has just offered a draw. What to do? What can you do? It sure looks dead drawn, doesn't it? Not so fast says 10 year old whiz kid Yian Liou!)

Sometimes a little bit of luck and a lot of determination can go a long ways in a chess game. The person who wants to win more and is willing to take some chances tends to get his way. Many masters believe in playing out positions that others would call a draw. When his higher rated opponent offered draw, perhaps young Yian Liou remembered something about the fighting style of IM Ricardo DeGuzman. The game finished as follows:

Click on this link to Chess Publisher for the entire game. Yian finished the National Open with a respectable score of 2.5 out of 6 while playing up in the U2200 section, facing only experts to gain tons of experience and even +8 rating points to 1964. Thanks to Yian's mom for the photo below of Yian and me in front of the stage. 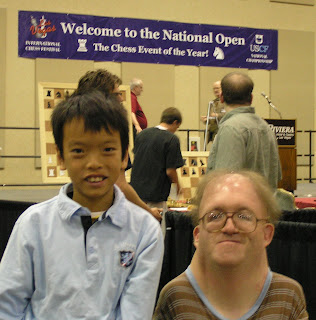