ConGRADulations to David, Marvin and Kevin! 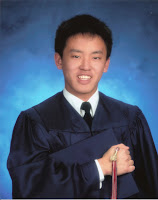 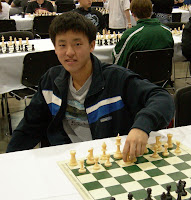 Three of my present and past students just graduated from High School. The Saratoga High School ceremony was yesterday, June 12. This section is a small tribute to each of them.

David Chock (2094 USCF, photos at top) completed four years as the top board for Saratoga High School. Shortly after I began teaching him in 2003, David won the U2000 section in Sacramento with a 6-0 score--as the lowest rated player, thus setting the record for the most rating points gained in one tournament by a student of mine! His greatest moment of glory came at the 2006 National High School Championship when he nearly won the whole enchilada, even defeating top seeded IM Alex Lenderman (reigning World U16 Champion) on the stage. David's school won five straight state championships dating back to middle school and even won three top 5 team trophies at the annual Nationals in the spring. In the past two years, he helped mold the young players from Redwood Middle School into a strong team that has now won two state team titles itself. As a recognition for how long we worked together, David joins Daniel Schwarz as a lifetime emeritus student. David will attend the University of California at Berkeley in the fall.

Marvin Shu (1804 USCF, photo at left) probably was better at math than chess, but he sure had fun playing the royal game. My earliest recollection of Marvin came from a game in middle school when he checkmated a higher rated opponent with two bishops against two rooks (even number of pawns). I also remember once thinking of how to scold him for playing on down a rook against a 1900 in tournament, when hours later he drew the game! I don't know if that's determination or just plain dumb luck. After graduating with highest honors from Saratoga High School, Marvin will attend my alma mater, Stanford University, in the fall. 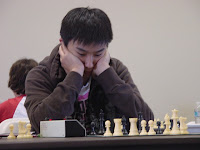 player, but studied the royal game for its beauty. As a natural attacker and a disciple of gambit openings, Kevin loved to play with fire on the board and occasionally even burned himself. After considering some east coast and midwest schools, Kevin finally chose the University of California at Berkeley for the fall.

Congratulations to all three graduates! Hopefully you will remember your days as a chess player when you're older and have an accomplished career.
Posted by Michael Aigner at 11:32 AM

"Hopefully you will remember your days as a chess player when you're older and have an accomplished career."

Why do you assume they will stop playing chess? Sure, they'll probably have less time, but the occasional tournament is not at all out of the question.