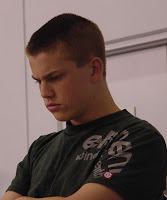 Congratulations to my students Alan Naroditsky and Steven Zierk and for earning their initial published FIDE ratings on the July 2008 list. Alan is 2136 while Steven is 2132. Both can now travel around the world and always have a rating. In fact, both will be playing at the World Open in Philadelphia next week. (Note: The first FIDE rating often means nothing. Both Alan's superstar brother and I started out with ridiculously low FIDE ratings. Some other players somehow experience the opposite. However, it all tends to sort itself out over time.)