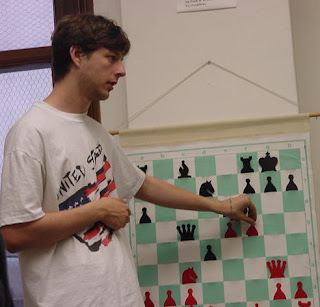 The San Francisco School of Chess kicked off its inaugural session on Sunday, June 22 with three exciting classes taught by Berkeley area natives IM David Pruess (photo at left) and FM-elect Sam Shankland. This was the fourth such lecture targeting the many elite young chess prospects in Northern California hosted and sponsored by the Mechanics' Institute Chess Club. Earlier programs featured GM Yury Shulman in January (sponsored by the US Chess School), GM Gregory Kaidanov in March and GM Melik Khachiyan in May.

The official goal of the School is to generate an environment for top juniors to learn by interacting with titled players and each other. Of course, the invited titled player will personally teach the top group. However, one difference between this program and others is that these students are also expected to share their understanding by teaching lower rated peers, under the supervision of the GM or IM in charge. NM Michael Aigner will further contribute to teaching support and consistency from one class to the next. Another goal of this School, as Chess Room director IM John Donaldson pointed out, is to mimic the many teaching opportunities of New York City. 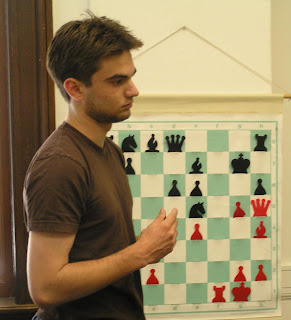 On June 22, IM David Pruess taught the first and third classes while FM-elect Sam Shankland (photo at right) taught the second class. The elite group, which consisted of masters Shankland, Gregory Young, Nicholas Nip plus expert Michael Zhong, learned valuable lessons in calculation, first in an endgame of rook and knight versus rook and then in a typical middlegame pawn structure that arises both from the French defense and the Scheveningen Sicilian. Together with the second group of players rated 1850 to 1950, high school senior Shankland explored a variety of complex middlegames in the Najdorf and then reviewed his wild recent game against FM Danya Naroditsky. Several observers noted the irony when "Shanky"--always known as a creative yet impulsive player-- implored his students to be more patient and calculate carefully. Lastly, Pruess, assisted a little by IM Irina Krush, taught the lowest group of three talented elementary age kids plus three top local girls, practicing the fine art of searching for unexpected moves in puzzles as well as real games. 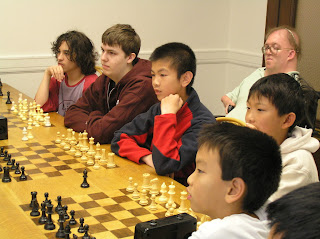 Posted by Michael Aigner at 7:30 PM