Day 1 Report from US Junior 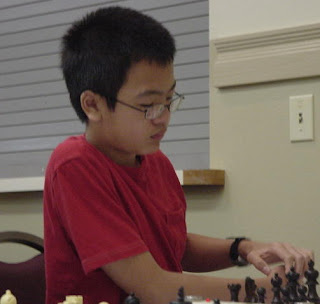 (Although Gregory Young is the youngest player the US Junior and also younger than all but one in the US Cadet, he's one of the tallest in the room, making him a formidable presence at the chess board.)

The first two rounds of the US Junior and US Cadet have been completed at the Karpov School in Lindsborg, Kansas. With only five participants, everyone plays everyone else twice (eight games plus two byes) in this year's Junior. The Cadet is a more traditional single round-robin, but everyone gets one bye since there are only seven players. The time control for both tournaments is the standard 40/2, SD/1.

According to my sources, the hospitality at the Swedish Country Inn is quite nice. Pretty teenage waitresses at the breakfast offer a small distraction from chess to the all-male field of competitors. The players have not yet experienced any thunderstorms or tornadoes, but Gregory did suffer a minor crisis when the airline lost his luggage for 24 hours. Too bad the "tropical" weather is so unlike San Francisco: upper 80s with 70% humidity.

Now on to the chess tournament results. In the words of the budding philosopher Mr. Young the Younger, the tournament is "upset city" so far. Both of the favorites went down in round 2: FM Daniel Yeager lost in 24 moves to NM Tyler Hughes in the US Junior while FM Darwin Yang was impressively outplayed by Conrad Holt in the US Cadet. NM Gregory Young had the bye in round 1 and then sacrificed his queen to beat NM Edward Lu this evening! The games are available on MonRoi after each round, but I recommend clicking on the links above because of some weird bugs in the MonRoi website.