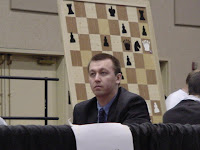 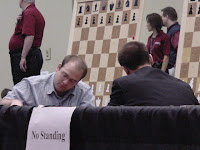 Now that I had time to collect my thoughts from Las Vegas, let me recap the National Open tournament. To make a long story short, everyone finished respectably well except for me!

Let's start at the top of the Open section. Congratulations to GM-elect Josh Friedel (see photo at top left) for a wild ride ending in a tie for first place. After administering the Spanish torture on yours truly, Josh took on three of the top rated Americans in the field. First, he drew with GM Hikaru Nakamura, then he beat GM Varuzhan Akobian and finally, he drew with FIDE World Cup Champion GM Gata Kamsky (photo at top right). Josh's performance rating was a whopping 2818, enough to make Kasparov happy. Read Chess Life Online for games and comments by America's next strong Grandmaster!

Three other local players competed among the big boys. IM David Pruess (photo at bottom left) ended up on the stage himself in the final round by beating GM Nakamura in a major upset. However, David's chance to share the top honors fell short against the attacking prowess of Armenian GM Tigran Petrosian. FM-elect Sam Shankland (photo at bottom right) lost to two Grandmasters, but earned a few rating points from one strong draw. FM Danya Naroditsky had both high and low points over the weekend, with the biggest highlight being a solid draw against Israeli GM Sergey Erenburg. Unfortunately, your humble blogger stank up the Las Vegas Strip, first hallucinating in a favorable position against a Grandmaster and then hanging an entire piece versus a lower rated opponent.

Few CalChess juniors came to Las Vegas because schools were not out yet. Kudos to three of my students for gaining experience and rating points in the lower divisions: Yian +8 in the Expert section, Kyle +3 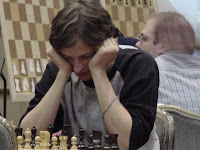 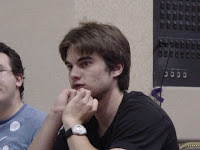