The Young and the Younger 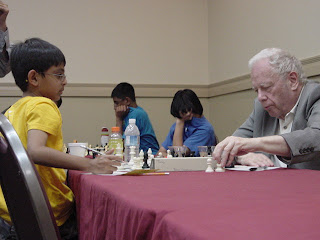 A total of 72 chess enthusiasts of all ages turned up for the Sacramento Championship on the 4th of July. The 25 player Master/Expert section features a competition between 5 masters and 11 nationally ranked juniors. After four rounds, 3 masters are tied for first at 3.5/4: NM Zoran Lazetich, NM Richard Koepcke and this writer, who took the reentry option. The top kids are just half a point behind at 3.0, both losing to one of the leaders. 12 year old Yian Liou already beat two masters while 11 year old Kyle Shin defeated a pair of experts. The final two rounds are scheduled for Sunday.

The exciting pairing that I hoped for in my blog post three days ago did indeed occur. The tournament's youngest player, 7 year old (edit: he turned 8 recently) Tanuj Vasudeva (1800), challenged the sly veteran 79 year old IM Walter Shipman (2209) in a battle for the ages. They traded into an endgame of queens, rooks and pawns that should have been drawn by best play. In the end, the young kid got greedy and took a poisoned pawn, allowing the more experienced master to deliver a mating attack. No doubt that's a lesson that the kid will now know.
Posted by Michael Aigner at 7:19 AM

Sounds like a great event. These kids never cease to amaze me.