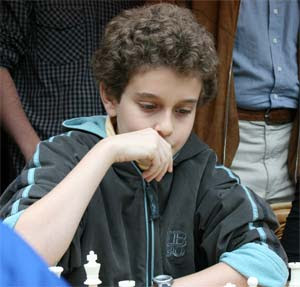 As a former World Champion, FM Danya Naroditsky struts his stuff at tournaments all around the planet. After a mixed performance in Philadelphia at the biggest Open in the World, the young star flew across the Pond to play in the Leiden Open in Holland, where he now has 4.0 out of 5. He struck gold in his round 5 game against Ukrainian Grandmaster Yuri Vovk (2567). After a lightning kingside combination that began with 50.Qg5 and ended with 54.Rc5, Danya finally could claim his first ever GM scalp. Congratulations!

Sounds corny, but this Kid is Dyamite !

Just place yourself in the GM's shoes that lost to a 12 year old kid and how would your ego be ?

My bad, I mean Dynamite ! either way you spell the word , that Kid kicks ass over the board !