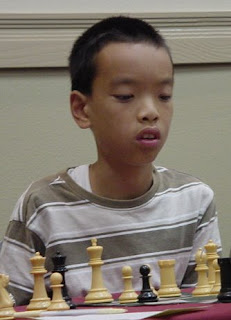 CalChess High School co-Champion and the Bay Area's newest master, 12-year old Yian Liou, wrote the following essay. He shares his own experiences about what it takes for a promising 1600 to reach 2000.

Yian reached 1600 USCF during Labor Day weekend in 2006 (at age 9) and became an expert within two years at the 2008 Pacific Coast Open. Exactly a year later, he earned his master certificate at the 2009 Pacific Coast Open. Apparently, Yian did something right over the years! Thank you for sharing your thoughts with the readers. --fpawn
Posted by Michael Aigner at 11:47 PM