Battle of Generations in Sactown This Weekend 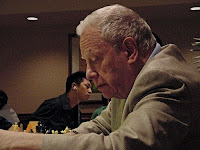 (The young and the old! 7 year old Tanuj Vasudeva next to 79 years young IM Walter Shipman.)


The Sacramento Chess Championship is one of the stalwarts on the Northern California tournament calendar, occupying the 4th of July weekend since 2001. In an era when one-day G/45 or G/60 events have become the norm, it is a relief to still find long games (30/90, SD/60) against serious competition, directed by well-respected TD John McCumiskey. The relaxed atmosphere at the Best Western Expo Inn on Howe Avenue contributes to the fighting spirit seen on dozens of 8x8 boards.

The advance entry list sets the scene for two intriguing subplots in the Master/Expert section. It will be nationally ranked juniors against masters and kids under 10 versus seniors over 65. Both CalChess K-12 co-champions, Yian Liou and Evan Sandberg, will no doubt hunt for master scalps and rating points as they near 2200 themselves. Another exciting pairing could pit the nation's top 7 year old, Tanuj Vasudeva, against a legend dating back to the 50s and early 60s, 79 years young IM Walter Shipman. 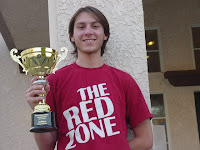 It is not too late for procrastinators to enter. A total of 58 players have signed up by Thursday afternoon; some others intend to sign up at the door. Players may choose between the leisurely 3-day schedule or the more economic 2-day option with three G/60s on Saturday. I would not be surprised to see IM Ricardo DeGuzman, defending champion NM Daniel Schwarz (see photo at left) and another two or three masters show up on Saturday morning for the 2-day schedule.

The annual Cal Expo fireworks show is scheduled for Saturday (July 4) evening at 9:30, but I expect to see fireworks at the chess boards begin much sooner. Be there!
Posted by Michael Aigner at 6:09 PM