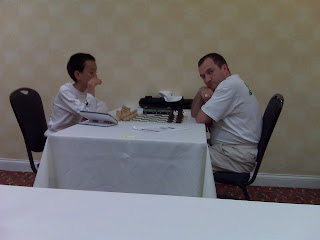 (Top board in the final round: Yian plays white against GM Khachiyan.)

As expected by many, including the majority of voters in a poll on this blog, 12 year old Yian Liou became the newest CalChess junior to earn the USCF master title. The CalChess High School co-Champion did so in style, scoring 4.0 against 6 masters at the Pacific Coast Open in Agoura Hills. He defeated IM Edward Formanek while losing merely once, to GM Melik Khachiyan on top board in the money round. Despite the last round loss, Yian tied for top U2300. With an amazing performance rating over 2450, his USCF rating jumped 50 points to 2212. Congratulations Master Yian!
It has been a real pleasure for me to watch Yian grow up from a shy 8 year old 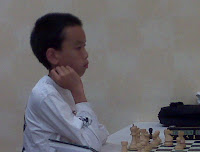 rated 1200 to reach the hallowed rank of chess master. He developed steadily in all disciplines of the game, as he demonstrated this weekend by crushing NM Julian Landaw (2278) after an opening mistake yet also easily drawing an endgame down a pawn versus NM Garush Manuykan (2357). Anyone who watches Yian play or analyze will quickly become inspired by his pure enthusiasm for the royal game. The sky is truly the limit for Yian with two full years to improve before he goes to high school.
Posted by Michael Aigner at 9:05 PM