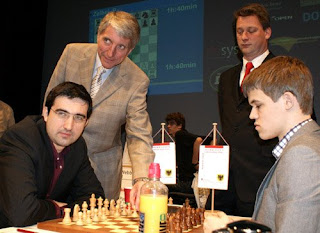 (Photo of the ceremonial first move. Kramnik plays white while Carlsen has black.)

Former world champion Vladimir Kramnik frequently faces criticism from chess fans about his boring approach and far too many short draws in the Catalan or Petroff openings. At the Dortmund tournament in Germany, Kramnik defied his usual style and demonstrated that even a positional genius can entertain with a flurry of tactics when the position warrants. His opponent was none other than Magnus Carlsen, the 18 year old Norwegian superstar whom most pundits pick to soon become world champion.

The action begins with a simple pawn sacrifice 18. f5 to weaken the king and culminates with a decisive rook sacrifice on e6. Your silicon monster may demonstrate that black seems to survive with 25... Qc5, but no human would find the variation 25... Qc5 26. Ne4 Qxc4 27. Nf6 and now Ke7!?!? Amazingly, white can't exploit the discovered check.

Enjoy the game below! I most certainly did.

Play online chess
Posted by Michael Aigner at 12:25 AM