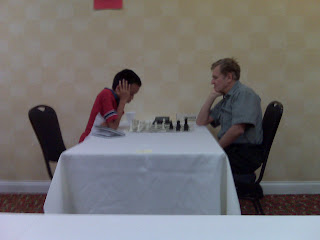 More than a dozen Northern California players drove down to Agoura Hills (near Los Angeles) for the Pacific Coast Open. Four of my students and a carload of precocious Chesspunks have arrived, eager to snatch rating points from unsuspecting opponents. Their names are well known around the Bay Area, and soon our friends down south will know them too: Tanuj, Vignesh, Kesav, Allan, Armaan, Samuel, Evan and Yian.

Two stars have done especially well so far. 12-year old Yian Liou has an undefeated 3.0 out of 4 in the Open section for a performance rating around 2500! He crushed IM Edward Formanek in the first round and easily drew as black against NM Garush Manukyan (2357) in the fourth. If Yian plays well on Sunday, then he will become the Bay Area's latest preteen master! In the U1900 division, 8 year old Tanuj Vasudeva won his first three games and is tied for the lead at 3.5 out of 4. The kids keep getting younger and better!

Partial results after round 4:
Mid afternoon update: Yian Liou, Michael Zhong, Arthur Liou and Tanuj Vasudeva all won to put themselves in contention for money.
Posted by Michael Aigner at 12:27 AM