Photos and Results from Nashville 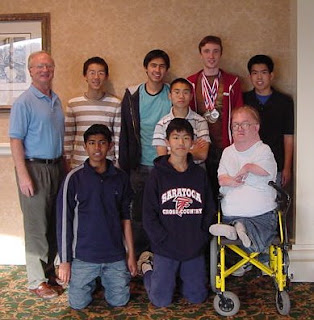 Please accept my sincere apologies for the delay in posting a report about SuperNationals IV. I am actually still recovering from the travel; my battle scars include one sprained toe, two bruises above my right eye and a mildly sprained left elbow. Despite these wounds, the trip to Nashville and back went quite well, at least away from the chess board.

Unfortunately, the results at the chess board were quite mixed. The Saratoga High School team finished in 11th place, a respectable finish in a very difficult section of 15 masters and over 50 experts. Kudos to Jeff Young for earning honorable mention with 5.0/7 and to Evan Ye for a solid 3.5/7 against five opponents rated over 1850. The U1600 team, severely handicapped by having only three players, ended up in 28th place. Despite the ups and downs, all eight players from Saratoga seemed to enjoy the team adventure. 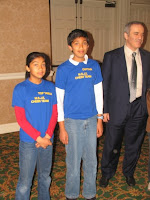 As most readers probably already know, the Mission San Jose Elementary team went to Nashville and conquered the K-6 Championship! They blew open a tight race in the final round with a dominating 4-0 score. Special congrats to Hemang Jangle for crushing the top seed (rated 2174) and earning the 17th place individual trophy. See the photo at right of Hemang with his younger sister and former World Champion Garry Kasparov. The rest of the team joined Hemang to finish tied at 5.0/7: Jerome Sun got 20th, James Kwok 24th and Armaan Kalyanpur 33rd place trophies. MSJE also earned two more top 10 team trophies in K-5 and K-3, both for 9th place. The lion's share of credit for organizing such a successful elementary school chess club goes to MSJE coach Joe Lonsdale. 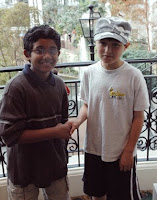 Four local players earned top 10 honors individually, led by National K-3 Champion Cameron Wheeler! Cameron won all 7 games, defeating friend Vignesh Panchanatham in the final round, and now is rated nearly 1800. The photo at left of Vignesh and Cameron was posted on Chess Life Online. Vignesh still earned the 4th place trophy as a consolation for a strong performance. Joseph Wan and Rayan Taghizadeh both got 6.0/7 in the K-1 section, earning 4th and 5th place trophies.

Click here for the final standings and the USCF rating report.

If any local parents have additional photographs that I may post, please forward them to me at the address located in the right sidebar.
Posted by Michael Aigner at 12:06 AM