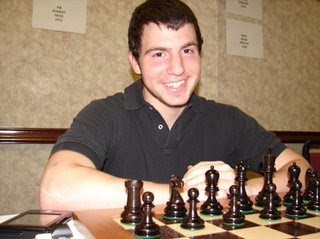 Thanks to a spectacular series of results over the past month, the United States now has one more home grown chess Grandmaster: Robert Hess from New York City. Over the course of just the past month, 17 year old Hess dominated the SPICE Spring GM Invitational in Texas, then went 7-0 to win the K-12 section at SuperNationals and finally matched wits against five straight 2600+ FIDE Grandmasters at the Foxwoods Open in Connecticut. Along the way, he faced many strong Grandmasters, defeating Hikaru Nakamura, Jaan Ehlvest, Timur Gareev and Dashzegve Sharavdorj. As a consequence of these phenomenal results, Hess earned his final two GM norms and a national championship.

Amazingly, he did all this in between taking the SAT and completing homework for his classes at Stuyvesant High School, one of the most competitive high schools in New York. If that wasn't enough, Hess played high school football a year ago!

I have known Robert Hess since we both played in the Las Vegas Masters in June 2006. When I first saw him, I thought the mature acting young man was a college kid whom I never met before. Imagine my shock when I found out this 2400 was just 14! We finished only 0.5 points apart, but he faced many top players and earned an IM norm while I spent much of the week struggling to stay out of last place. Hess and I met again in round 2 of the 2007 US Championship in Oklahoma, where I managed to swindle a draw from a losing queen endgame. Ever since, I have followed his results on ICC.

To read more about GM-elect Robert Hess, check out this interview on Chess Life Online with editor Jennifer Shahade.
Posted by Michael Aigner at 4:20 PM