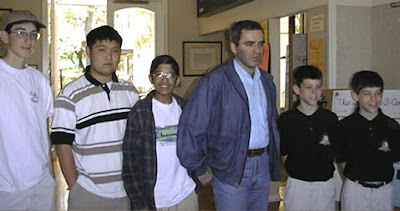 Never in my life will I forget the events of April 21-22, 1999. For two days, I had the honor to meet the reigning World Champion Garry Kasparov as he visited Stanford University. The world's top player was a guest of the Stanford Presidential Lecture series, although much of the job of hosting him fell to the Russian department and the nationally ranked Stanford chess team.

My chess teammates picked up Kasparov and his manager, former tennis pro Owen Williams, at San Francisco International airport and even stopped for ice cream on the way to the Westin Hotel on El Camino at University Avenue. That evening, Stanford officials and chess players met for a formal dinner at Spago's in downtown Palo Alto. Kasparov discussed everything and anything not related to chess, from world politics to the Yankees to restaurants in Rio de Janeiro. He was friendly and quite talkative, but while dessert was served, Kasparov abruptly announced it was getting late and he had to return to the hotel to finish his speech. He literally walked out while everyone else shook hands and exchanged pleasantries. I was the first to see the World Champion nervously pacing up and down Lytton Street. He politely pointed out to me that none of the passerbys identified him, something that he found odd for such a highly educated community.

On the next day, Kasparov met with the Russian department in the morning and then he had two events with chess players scheduled for the afternoon and evening. The first was a Q&A session with many of the Bay Area's elite juniors at the time, including masters Jordy Mont-Reynaud, Vinay Bhat and Philip Wang. Vinay and Kasparov bantered back and forth, analyzing crazy variations in the spectacular double rook sacrifice game Kasparov versus Topalov that was played just two months earlier. Kasparov said then that was the best game that he ever played. It was a pleasure to see the event go off successfully as I organized much of the publicity, including inviting the kids to attend. Nervously, I introduced Kasparov to the young audience as the greatest chess player of all time, a statement that I still agree with today.

The highlight of the visit came on the second evening. Stanford University's Science and Engineering lecture hall, usually filled with Biology students, was jammed packed with well over 500 Bay Area chess enthusiasts. Nobody reckoned with such an enthusiastic turnout and, unfortunately, the fire marshall ordered dozens of people sitting in the aisles to leave. Chess club President FM Adrian Keatinge-Clay introduced the World Champ.

ance" in chess and sports. According to Kasparov, chess can be a long and cruel game determined by time constraints and sometimes one crucial move. "If you lose psychologically, then you will lose on the board," he said. Later Kasparov took questions from a panel that included computer science professor Terry Winograd and Stanford football coach Tyrone Willingham. One controversial topic was the famous match that Kasparov lost to IBM supercomputer Deep Blue in 1997 (see photo at right), the first time that a computer defeated the top chess player in the world. Check out two articles in Stanford publications about this exciting evening: the Stanford Report and the Stanford Daily.

I can say this event was a once-in-a-lifetime experience for me. I wasn't yet a master, but I met the strongest player in history. I only wonder if Kasparov would still recognize me today. Unfortunately, I didn't get to meet him at SuperNationals earlier this month.
Posted by Michael Aigner at 11:45 PM

I remember this event I actually got there early was cleared to sit up front because of my press pass. I vaguely remember all of the papers in seats with the names GM's and other press corps. I might still have some pictures, and audio around somewhere. What I remember the most though was after the speech how the crowd rushed to the front for pictures and autographs. If I recall he took a few pictures and gave a few autographs but then stepped behind some folks at the front while Adrian stepped up to the mic and let folks know to not rush the front as GM Kasparov was there only give the lecture and couldn't stay long for pics and autographs. Great lecture.