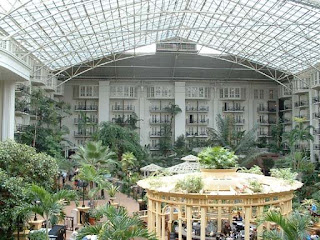 (This photo shows the atrium of the Cascades section of the hotel, where we are staying.)

Everyone seems to have arrived at the Gaylord Opryland hotel in Nashville, the site of SuperNationals IV. Unfortunately, we had some unexpected adventures en route; the weather was terrible. In fact, a tornado touched down within five miles from the playing site, causing a major evacuation before we arrived. Our flights came down just minutes after the severe thunderstorm passed through, but we still saw multiple lightning strikes nearby. I wonder how come they even let us land in this storm; actually Jeff and his father were diverted to Louisville due to the bad weather and arrived two hours late.

To make a long story short, the Saratoga High School chess team players were in our hotel rooms by 8pm Central time last night. We had dinner in the hotel, although the service was quite slow. Our three rooms are nice, maybe 30% larger than the room we crammed into four years ago, and are all close to each other. Unfortunately, we are located in the Cascades area of the hotel, near the lobby yet far away from the playing site. With everything under one roof, I guess it isn't too big of a problem.

Perhaps the biggest obstacle that we encountered so far was the parking gate to the self-parking lot. Unfortunately, Charles Sun's father had to waste several hours trying many different keys just to get the
Posted by Michael Aigner at 5:14 AM