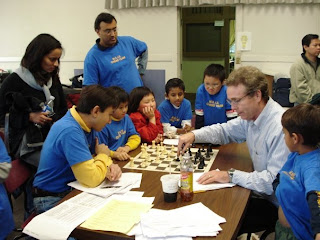 The online magazine InsideBayArea.com published this article on the success of Mission San Jose Elementary's chess team at SuperNationals in Nashville. A group of 16 kids collected top 10 team trophies in three different sections, including first place in the K-6 Championship! To put this in perspective, no Bay Area school has won a national title since Lowell High School did in 1994. In fact, one of the New York City programs captures the Elementary school title in most years.

The organizer and driving force behind the team is coach Joe Lonsdale. Here he describes the achievement: "I've been aiming for this for four years. I had a group of second-graders I started with. ... I recognized I had a group with tremendous talent. I've watched them blossom," Lonsdale said. "I've always believed the students are very bright and very capable. But seeing them get the national, it's very satisfying."
Posted by Michael Aigner at 9:11 AM