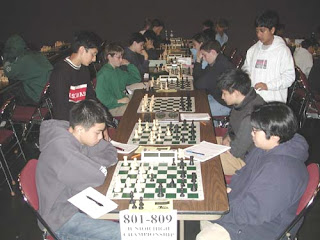 (How many players do you recognize in this 2003 photo of the top boards in the K-8 section at the CalChess Scholastics in Santa Clara?)

CalChess scholastic guru Dr. Alan Kirshner maintains an interesting historical website listing all of the winners at the CalChess Scholastics dating back to 1986. These records show individual winners, including ties for first, and the team champions. Due to the conflicting tournaments in 2005, both the "states" and "regional" winners are shown.

I searched these records for multi-time individual state champions. Some players won the same section in consecutive years (Vinay Bhat won clear first in the K-12 for 4 out of 5 straight years) while others earned their titles in different divisions (Daniel Schwarz won K-3 in 1998, K-8 in 2002 and K-12 in 2006). The records show that over 23 years, only four people earned more than three CalChess titles. Even the list of names at three championships (Varsity sections only) is quite thin and prestigious.

Congratulations to the ultimate CalChess champions! I count one current GM, two current IMs and eight masters among these names.

oh man. whose that dude that crushed arnav with the french on board 2??

dayum, nic looked like such a stud that tourn