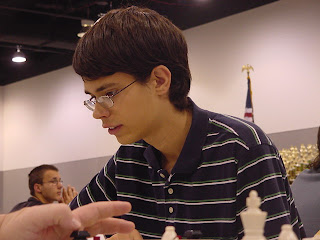 NM Landon Brownell passed away this morning after a car accident. (Update: The crash occurred near Bakersfield, California at about midnight on Monday night.) He was 19 years old, spending much of his life in Corvallis, Oregon and Tucson, Arizona. Landon's claim to fame came in 2006 when he won the National High School Championship. He was a key member of the Catalina Foothills High School (Tucson) dynasty coached by FM Robby Adamson. You can read Robby's tribute on Chess Life Online. Landon's final chess ratings were 2255 USCF and 2283 FIDE. He was also a US Champion and a 7 dan at Go.

Although he played for an Arizona school, I saw Landon frequently, either at nationals or at tournaments in Los Angeles or Las Vegas. He was a fierce competitor yet a gentle and social person. Landon defeated my student David Chock on board 1 in the final round of the 2006 nationals and shared first place with NM Daniel Schwarz at the 2007 nationals blitz. He also faced some other local juniors, most notably Michael Zhong.

If there is a lesson for all of us to learn, it is this: Do not drive while sleepy.

This is a tragic end to a great person and a fierce competitor, it was not time for him to go there was so much more for him to live for, and we all owe it to him to always remember him as the great young man that he was, and remember to never drive when tired, especially not alone.

Unfortunately, I cannot say I knew Landon well. But everything I did know of Landon, I admired. I'd like to share 5 moments I remember about him.

1. In the American Open, I happened to play his coach Robby Adamson. I didn't know Landon or Robby at the time, but about fifteen moves into my game with Robby, I could already tell that Landon was Robby's student. Landon visited our board many, many, many times, and I was amazed at the passion he held not only in his games, but also in his friend's.

2. I happened to play him at that same tournament. After 50 moves, I had a drawn position. He was perfectly aware of that, knew he would win, and crushed me.

3. When I bumped into Landon again at Kansas City, I greeted him with a pound, and he greeted me with a hi-five. It should have been awkward, but he made a great joke about it and transformed that moment into a fun time.

4. In that same conversation, he mentioned that he came down to check team pairings. He also mentioned that he wanted to play Lenderman and Bercys (two strong International Masters), so that he could have superior tiebreaks. Immediately after the conversation, I was in awe of his confidence. Immediately after the tournament, I was in awe that he, the best player on the best team in the country, was checking the pairings for the team. (and it was an exhausting walk from the hotel rooms to the tournament site)

5. At that same tournament, Landon was my only opponent to offer a handshake (with an accompanying smile) after the game.

Rest In Peace Landon Brownell and I know that I'm one of many that can say it was an honor and pleasure to know you.

I have been playing rated chess since 1988, and therefore got to watch Landon's rise to the top echelon of scholastic chess in its entirety. All I can say at this time is the truth : he was a very gracious young man, and one of the most talented players I have ever met.
sincerely, Dan Katzel

I did not know that Landon was even a chess player. Landon shared an office wiht me here in Bakersfield, CA. We talked about many different things during the three months that i spent with him; but the great thing about Landon was that he never ever would brag about his chess abilities; or any of his many talents. I found out he was a chess master the day he passed away. Landon was truly an inspiration to so many different people; he made you feel that by being in his presence you were truly lucky. Landon put his mind to anything and everything and was so talented. He fixed my virus filled computer everyday for me; and the friday before he passed away he said he would teach me how to fix it instead of doing it for me, that way if he ever wasnt here then i wouldnt be without my computer. He taught me on friday, so its thanks to Landon I am able to even write this post :) I feel so blessed to have met such an extraordinary person. Every now and then someone passes through your life and you know the instant that you meet them that they are amazing and sent from God; Landon was this person to everyone.

damir studen. this is a very sad story. although i did not know landon that well, i did speak to him a few times and he was very nice towards me. i was shocked when i heard about this. although he is gone we need to remember all the good things about him as he would want us to. rest in peace landon

Landon Brownell, we knew him and his family in Tucson where we live. He was a great mind, a great talent, a gracious and humble person. What can you say about a wonderful young man who finished High School (home schooled by the way),skipped college, and straight into Law School! (Like Lebron James going from High School straight into the NBA). Awesome talent, but above all he knew his creator. We do miss him. Rodger, his dad, you have our deepest sympathy and prayers. Godfrey and Ann, Tucson, Arizona

God Almighty..... Even though I haven't seen him in years, this kills me. I will miss him dearly. Is there any info on a service? I would love to attend.

According to the Corvallis, Oregon newspaper, the service was today (Sunday) at 10:30am at Faith Christian Fellowship, 3160 SW Western Avenue. Here is the full obituary in the Corvallis Gazette-Times.

I'm Landon's sister-in-law and I just wanted to say thanks for the comments. Your support and prayers are valued by the family. Thank you.